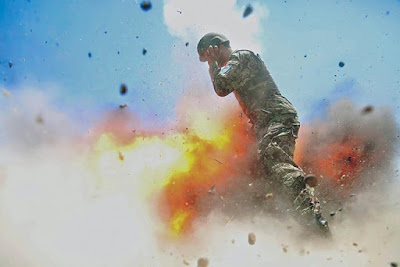 This picture is from an article in The New York Times. Taken in 2013, the photograph is the last image ever captured by twenty-two year old photographer Hilda Clayton. The mortar explosion shown in the photograph killed Clayton. It was an "accident," occurring during a "training exercise." She and four Afghan soldiers died. The article in The Times is worth reading.

It is also worth thinking about the photo as a visual metaphor. We are all behind the lens, watching and recording dangerous exercises that might well kill us.

Think about global warming. Think about the many, various, and escalating military involvements in which our nation is ever more deeply engaged, including the conflict in Afghanistan that led to Clayton's death. Think about the continuing threat of nuclear war.

If you think about it that way, this photo is a metaphor. We can see it coming, just like in the photo. Unlike the photo, though, we know it's coming before we actually see it in fact.

If you know it's coming, you don't have to wait around until it's too late.

We might be able to change what we're doing before the bombs blow up.