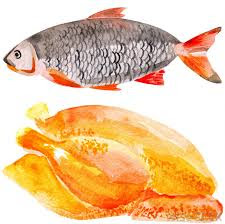 I am not much of a fan of Thomas L. Friedman, a columnist who writes in The New York Times. I did like his column yesterday, though. It was titled "It's Chicken Or Fish." I encourage you to click the link and see what Friedman has to say about the President's firing of FBI Director James Comey. Here is Friedman's opening salvo:

Since President Trump’s firing of F.B.I. Director James Comey, one question has been repeated over and over: With Democrats lacking any real governing power, are there a few good elected men or women in the Republican Party who will stand up to the president’s abuse of power as their predecessors did during Watergate?

And this question will surely get louder with the report that Trump asked Comey in February to halt the investigation into the president’s former national security adviser. But we already know the answer: No.

The G.O.P. never would have embraced someone like Trump in the first place — an indecent man with a record of multiple bankruptcies, unpaid bills and alleged sexual harassments who lies as he breathes — for the answer to ever be yes. Virtually all the good men and women in this party’s leadership have been purged or silenced; those who are left have either been bought off by lobbies or have cynically decided to take a ride on Trump’s Good Ship Lollipop to exploit it for any number of different agendas....

There will be no G.O.P. mutiny, even if Trump resembles Captain Queeg more each day.

Democrats and independents should not be deluded or distracted by marches on Washington, clever tweets or “Saturday Night Live” skits lampooning Trump. They need power. If you are appalled by what Trump is doing — backed by House and Senate Republicans — then you need to get out of Facebook and into somebody’s face, by running for Congress as a Democrat or an independent, registering someone to vote for a Democrat or an independent, or raising money to support such candidates.

I don't really "get" the "Chicken Or Fish" dichotomy. But what Friedman says about the need to mobilize political power to change our politics?

And I agree with Friedman's conclusion, too.