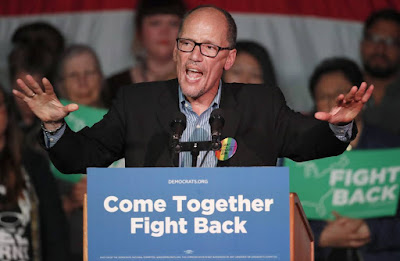 Pictured above is Tom Perez, who serves as Chair of the Democratic National Committee. The DNC runs the Democratic Party. The photo is from an article by Gerald F. Seib, in his "Capitol Journal" column in The Wall Street Journal. Seib's column was titled, "Democrats Ponder New Tactic Against Trump." That is the title used in the print edition. "Democrats Ponder Whether Resisting Donald Trump Is Enough" is the title that appears in the online edition.

"Resisting" the President and his various governmental efforts does seem appropriate. The President is trying to dismantle our system of environmental safeguards, and not only ignores the threat of global warming, but actively promotes policies that will make things worse. He is attacking our health care system, hurting poor people, while he urges tax cuts for the extremely wealthy. He is making makes moves towards a nuclear confrontation with Korea, and seems clearly committed to trying to solve complex international problems with military intervention. He is narcissistic to a dangerous degree, and his Administration is also rife with apparent corruption and conflicts of interest.

Resist all this? Sure!

It should be noted, however, that the Clinton campaign was pretty much based on personal opposition to Donald Trump the candidate. That didn't end up working very well. It should also be noted that despite what Trump opponents see as a disastrous beginning to the Trump presidency, a record that definitely indicates that "resistance" is required, the vast majority of those who supported Trump the candidate continue to support Trump the president. There is a serious question whether more "resistance" is going to change their minds, and alter the current state of our politics.

I suggest that "resistance," while necessary, is not going to be sufficient. Those who believe that what the president is trying to do is profoundly wrong need to get beyond "resistance" and criticism, and promote a positive program of the political changes we actually need.

I think any winning political strategy, in other words, must be based on "insistence," not "resistance."

If the Democratic Party won't develop and promote such a positive program, insisting upon it, in fact, all the resistance in the world won't change what's happening to our politics. Unless we insist on transforming the social, economic, and political realities that now prevail, our future as a democratic republic is at grave risk.