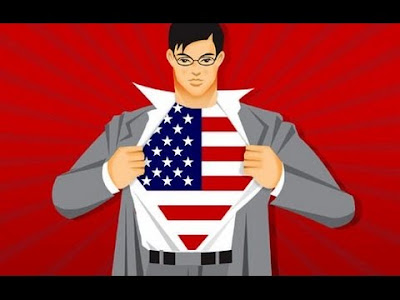 I am not a big fan of "American Exceptionalism," and I am particularly not a big fan when the term is used in the third sense listed by Wikipedia, in its article defining the term:

American exceptionalism is one of three related ideas. The first is that the history of the United States is inherently different from that of other nations. In this view, American exceptionalism stems from the American Revolution, becoming what political scientist Seymour Martin Lipset called "the first new nation" and developing the uniquely American ideology of "Americanism,"based on liberty, egalitarianism, individualism, republicanism, democracy, and laissez-faire economics. This ideology itself is often referred to as "American exceptionalism." Second is the idea that the U.S. has a unique mission to transform the world. Abraham Lincoln stated in the Gettysburg Address (1863) that Americans have a duty to ensure that "government of the people, by the people, for the people, shall not perish from the earth." Third is the sense that the United States' history and mission give it a superiority over other nations.

Pilon says that the term "American Exceptionalism" originated with Stalin. That's news to me - and I bet it's news to you, too! I was happy to get this background briefing, but what I found most compelling in Pilon's article was what she said about Donald J. Trump. I think that the quotations below show that candidate Trump, now our President, was right on target:

Candidate Donald Trump ... didn’t care for the term [American Exceptionalism]. As he told a group of Republicans in 2015, he thought it impolite: “I don’t want to say, ‘We’re exceptional. We’re more exceptional.’ Because essentially we’re saying, ‘We’re more outstanding than you . . .’ ” [Trump] also questioned the premise: “We’re dying. We owe 18 trillion in debt. I’d like to make us exceptional. . . . We may have a chance to say it in the not-too-distant future. But even then, I wouldn’t say it. . . . Let’s not rub it in.”