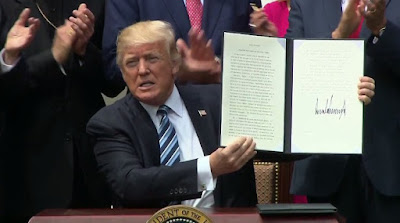 The same day that Republicans went to the White House to celebrate "getting rid of Obamacare," the President signed an order that he claimed would "protect and vigorously promote religious liberty." The impression given by the President was that something significant was involved in his promulgation of this new Executive Order, and that some important change in national policy was on the way.

Here is a link to the full text of the President's order. Apparently, the actual order was virtually all "hype," nothing but "an elaborate photo op." That, at least, is what the American Civil Liberties Union said, as quoted in an article in the May 5, 2017, edition of The Wall Street Journal:

The American Civil Liberties Union, which had threatened a lawsuit before its details were released, backed down by the end of the day.

“Today’s executive order signing was an elaborate photo-op with no discernible policy outcome. After careful review of the order’s text we have determined that the order does not meaningfully alter the ability of religious institutions or individuals to intervene in the political process,” said ACLU director Anthony D. Romero.

A sincere religious conservative, Rod Dreher, who was recently profiled in The New Yorker, agrees with the judgment of the ACLU. Dreher calls the President's Executive Order "phony," and notes that its only practical effect is to free up churches to make more political contributions directly to candidates like Donald J. Trump. Our President, of course, way before he had even 100 days in office under his belt, established a campaign committee for 2020, and he is actively raising money for a 2020 reelection bid.

"Fake News" undermines our belief that we can find out the truth about something by seeking out information on issues of importance to us. As "Fake News" proliferates (and that process is well underway), we come to expect that all news will be "fake," and we thus lose any belief that the information we are able to find, on any subject, has any relationship to what is actually real and true. This does impair, rather substantially, our ability to engage in the process of self-government.

"Fake Politics" will undermine our belief that politics is important, and that it is worth our while to participate. "Fake Politics" comes in many forms, as "Fake News" does, too. But the essence of "Fake Politics" is that those engaged in the political process on our behalf, our elected representatives, are only pretending to be doing something meaningful, as they appear to engage in substantive political debate, and to make substantive policy decisions.

Any healthy politics depends on a belief that the process is important, and that the political decisions being made are real, based on real choices, and with real consequences. When it turns out that what seem to be decisions are not decisions at all, then it makes a lot less sense to be engaged in the political process.

Without our engagement in politics, self-government fails. "Fake News" and "Fake Politics," in whatever form they are dished out by the dissemblers who engage in them, are hugely destructive of our democratic hopes.