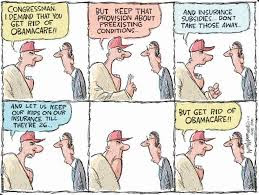 Paul Ryan, House Speaker, is at the center of the happy group pictured at the bottom of this blog posting. Our current Vice President, Mike Pence, anchors the celebration on the right hand side of the photo.

Of course, you can guess what has caused these politicians to gather together to express their joy. The House of Representatives had just passed a bill that "gets rid of Obamacare," making good on a longstanding Republican Party promise.

It was hard to get the House to pass the bill, because, as the San Jose Mercury News said in its editorial headline in the print edition of yesterday's newspaper, "the House's health care bill is a total disaster." Still, the House bill did "get rid of Obamacare," or at least it would have that result if the bill were endorsed by the Senate, which seems unlikely.

What I thought was the most terrifying statement in the Mercury editorial was this:


The process was so secretive that conservative Sen. Rand Paul had this to say Thursday: “We’re here asking for written copy of this because this should be an open and transparent process. This is being presented as if it’s a national secret. As if it’s a plot to invade another country.”

Politics is supposed to be about "policy," about how we want to structure and run our world. Conflict and controversy, and a spirited debate and disagreement about what policies should be enacted, are all definitely to be expected. Usually, there are some pretty good arguments on all sides. We, the people, expect our elected representatives to make the tough choices on our behalf. We count on these representatives to be aiming at what they think is the right thing to do, in substantive, policy terms. If we want to maintain our democracy, the people must believe that this is what politics is all about.

Unfortunately, on an issue of truly huge importance to almost everyone in the United States, the House of Representatives absolutely failed to engage in a genuine political debate. The bill that passed was not a debate over policy, because those voting for the bill didn't even know what the bill said.

No one will be able to believe in our politics, or will be willing to spend time, effort, and money on politics, if this is what politics means. And without politics, power (not the people) will rule.

Completely disregarding the merits of the legislation, what just happened in the House of Representatives is no cause for celebration.

There shouldn't be jolly smiles and backslapping at a funeral, and the death of democracy is what will occur if our representatives don't even know what they're doing, when they do us in. 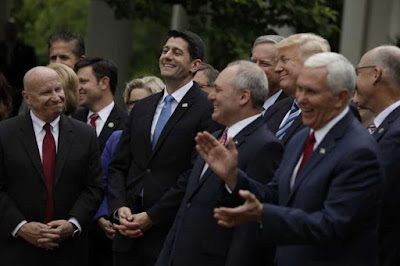