#125 / Politics Is Not Entertainment 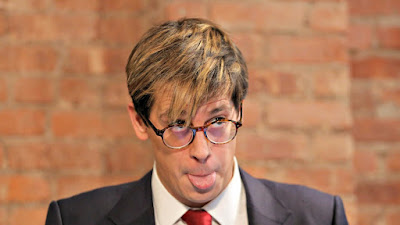 Pictured above is Milo Yiannopoulos, who apparently describes himself as a "cultural libertarian." Yiannopoulos' latest venture is what Vanity Fair calls an "ugly, for-profit troll circus." In short, Yiannopoulos plans to develop a "live-event touring company," dedicated to making the lives of political progressives "a living hell." The company will be composed of "libertarian and conservative comedians, writers, stand-up comics, intellectuals, you name it.”

According to Vanity Fair, this new political entertainment effort is to be "funded by a $12 million stake from 'secret investors.'" Presumably, these investors are less concerned about the "for-profit" aspect of the venture, and are more concerned about the politics, which are coming from what is now called the "alt-right." That term is deliberately non-descriptive, because when it becomes clear what "alt-right" actually means,"Ugly" would be a serious definitional understatement. Wikipedia provides the following explanation of the "alt-right" terminology:

The alt-right, or alternative right, is a loose group of people with right to far-right ideologies who reject mainstream conservatism in the United States. White supremacist Richard Spencer appropriated the term in 2010 to define a movement centered on white nationalism, and has been accused by some media publications of doing so to whitewash overt racism, white supremacism, and neo-Nazism. Alt-right beliefs have been described as white supremacist, frequently overlapping with antisemitism and Neo-Nazism, nativism and Islamophobia, antifeminism and homophobia, white nationalism, right-wing populism, and the neoreactionary movement.

In reporting on this new Yiannopoulos effort, The Daily Beast notes that "earlier this year Yiannopoulos resigned from Breitbart.com, lost a six-figure book deal, and had his CPAC speaking gig canceled after video surfaced of him appearing to condone pedophilia." The Daily Beast article is headlined: "Just go away."

Before we all go away (which is very good advice, indeed), I want briefly to observe that both "left" and "right" are turning politics into entertainment. It would be fair enough, I think, to match up Milo on the "alt-right" side with Samantha Bee and her "Full Frontal" television review on the other side of the political spectrum. We'd better watch out.

Entertaining as these political circuses might be, on both sides of the political spectrum, they have the effect of degrading the serious nature of genuine political debate and discussion. They also divert our attention from the real impacts of what governments do. The MoveOn petition site, for instance, directly recognizing this fact, is now hosting a petition titled: "Tell The Media: War is not entertainment."

Turning politics into entertainment can ultimately destroy our system of democratic government. That's what will happen if we start forgetting what politics and government are actually all about.