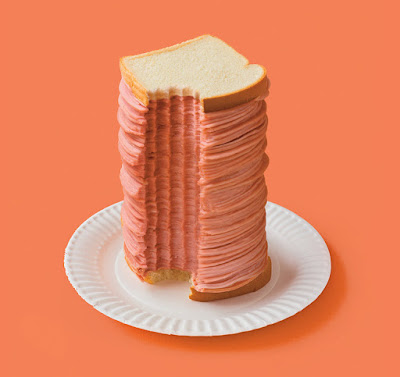 The New York Times Magazine ran an article by John Herrman in its April 16, 2017, edition. Titled, "Level Up," Herrman's article noted that the language of computer software is now increasingly dominating our list of "go to" metaphors. Our brains, for instance, are increasingly compared, metaphorically, to computers.

In the "pull quote" at the top of the article (as the article appeared in the print edition of the magazine), Herrman asks a question: "Tech companies conceive of themselves in terms of the 'stack' - the layers of software and services with which new products are built. Are people starting to see themselves that way, too?

It may be, looking at the photo chosen to accompany Herrman's article (the photo I have placed at the head of this blog posting), that The Times, and/or Hermann himself, think that this "stack" metaphor, as a way to describe human beings, is nothing but a bunch of baloney.

Herrman never actually makes that statement, so, as they say on one of those news and entertainment networks: "You decide!"

In his article, Herrman quotes Benjamin Bratton, whom Herrman identifies as a "professor and design theorist." In his 2016 book, The Stack: On Software and Sovereignty," Bratton apparently proposes a "specific model for the design of political geography tuned to this era of planetary-scale computation."

What the heck does that mean?

If Herrman's report is to be trusted, "Bratton sees the world around us as one big emerging technological stack. In [Bratton's] telling, the six-layer stack we inhabit is complex, fluid and vertigo-inducing: Earth, Cloud, City, Address, Interface and User."

If we decide that this is the way to understand our human situation, we end up as the "Users."

Again, you can decide for yourself, but now that I have read about this idea that the "stack" is the right metaphor for our times, I am definitely going with the baloney comparison.

Human beings are not "users" and "consumers" nearly so much as we are actors and creators. Sometimes, it appears that "tech" folks see the machines that humans beings have created as more important than the human beings themselves.

That would be a mistake!