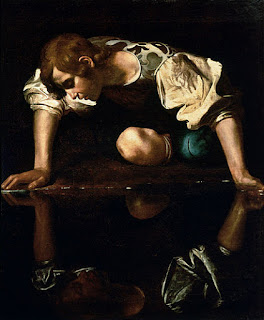 It is thought by many that our current president manifests narcissistic behavior to a significant degree.

Kim Jong-un, the Chairman of the Workers' Party of Korea (WPK) and the supreme leader of the Democratic People's Republic of Korea, commonly called North Korea, is another national leader who many think may be dangerously narcissistic.

Narcissistic behavior is not, generally, considered to be a good thing, and it is listed as potentially pathological in the DSM, the Diagnostic and Statistical Manual of Mental Disorders.

Here is my question for the day: "Can nations (apart from their leaders) also be narcissistic?"

Ben Sasse seems to think so. Sasse is a Republican, and is the junior United States Senator from the state of Nebraska. He recently wrote an opinion piece for The Wall Street Journal, "The Challenge for Our Disruptive Era." Here is how he leads off his article:

I am a historian, and that usually means I’m a killjoy. When people say we’re at a unique moment in history, the historian’s job is to put things in perspective by pointing out that there is more continuity than discontinuity, that we are not special, that we think our moment is unique because we are narcissists and we’re at this moment. But what we are going through now—the past 20 or 30 years, and the next 20 or 30 years—really is historically unique. It is arguably the largest economic disruption in recorded human history. And our politics are not yet up to the challenge (emphasis added).

Sasse's suggestion that "we are narcissists" (meaning the nation as a whole, as I read it), is worth thinking about. The implications are important.

Believing that we are a "special" nation can lead to some mightily destructive and counter-productive behavior. Claims that "we are special," particularly when we are NOT that special, can get us into trouble.

Could Americans get their heads around the idea that we are NOT special? Is it possible that we are NOT (as our recently-appointed Ambassador to the United Nations has claimed) "the moral conscience of the world?"

Narcissism comes in various flavors, and while I'm concerned about how narcissism is manifesting itself in our current president, our national narcissism may be even more dangerous.

For instance, meet Supreme Leader Kim Jong-un, and his claimed ability to bombard the West Coast of the United States with nuclear missiles.

Let's not try to out-narcissist a narcissist! Kim Jong-un might just try to prove that he is more "special" than we are.

Claims of American "exceptionalism," claims of an American moral goodness not possessed by others, can easily become pathological.

As Nikki Haley's claims make clear, we have been staring into the pool way too long!