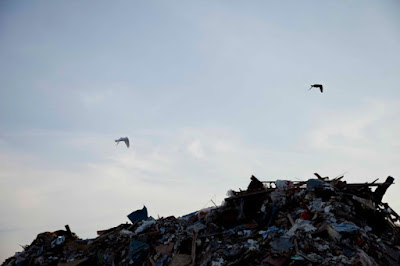 Besides that article by John Herrman, exploring the usefulness of the "stack" as a metaphor for human existence (an article I mentioned in my posting yesterday), the April 16, 2017, edition of The New York Times Magazine had an excellent article entitled, "Pictures in the Aftermath," by Teju Cole, which focused on the responses of Japanese photographers to the Fukushima disaster.

One of the photos referenced in the article is reproduced above. It is "Untitled," by Rinko Kawauchi, from her series, "Light and Shadow."

I love good photography, but what I ended up appreciating most about the "Pictures in the Aftermath" article was finding out that the Fukushima Disaster is called 3/11 in Japan, because it began on March 11, 2011.

3/11 is fully as horrible as our own 9/11. But it does have a lesson to teach. Our human world, the constructed world we most immediately inhabit (and which world most certainly includes the nuclear powerplants we have built), is ultimately dependent on the World of Nature.

We forget this at our peril.

Kawauchi's photo, above, is an illustration of what remains of our world, when we have ignored the World upon which everything we have built depends.