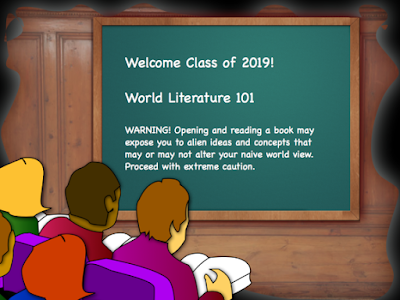 There has been a lot of discussion about so-called "trigger warnings," particularly within the academic community. If you want to survey the parameters of the debate, just type "trigger warnings" into your Internet browser. You will get lots of links to arguments on all sides.

Recently, I saw a variant of the "trigger warning" debate in the context of movie reviews. Alyssa Rosenberg, who writes on culture and politics for The Washington Post, outlined her philosophy on "spoiler alerts." Since I received her commentary in an email, and couldn't locate it online, I reproduce it below:

This week, I got a number of emails complaining about the fact that I discussed part of the plot of the film “Get Out” in a piece about stories about privileged white women without noting that I was going to do so. This seems like an apt moment to remind Act Four readers how I handle labeling stories based on the content I discuss.

An underlying factor in the approach I use is that I intensely dislike the idea that knowing any element of a plot before you consume a story necessarily “spoils” that story. If a piece of art depends entirely on a plot reveal for its value, that’s a fairly limited assessment of what that work is capable of. Knowing a plot reveal can actually make it easier to focus on how the work builds up to that reveal and how it handles plotting, characterization, tone and theme. Using the word “spoiler” implies a value judgement I rarely share.

That said, because I try to be polite and because I want to be consistent, I’ve come to rely on the statute of limitations used by Vulture, the pop culture offshoot of New York Magazine, and codified by Dan Kois in 2008. Kois’s rules don’t address shows released all at once for streaming, which were barely even imaginable back in those halcyon, pre-“peak TV” days nine years ago. And they deal with whether something can be discussed or used in a headline, rather than labeled. But it’s a pretty fair set of rules, making time for people who both genuinely want to see something and who don’t want to do anything to protect themselves online to make sure they can get a movie ticket or catch an episode of television.

I understand that my adherence to these rules isn’t going to please everyone. But I hope that by reminding everyone that this is how I work, you’ll be able to approach my work accordingly. I’m not a reviewer: I’m not telling you what to watch before it hits the screen. Instead, I’m a critic, helping you digest what you’ve seen after the fact. That means I work in comparisons and pull from work released on a lot of different dates. I’ll label things when I’m writing very close to a release date, but I can’t anticipate when every single person who reads my work might get to a certain show or movie — and believe me, I once got yelled at for writing about the end of “Ender’s Game” decades after its release. If there’s something you’re passionately avoiding any mention of, the safest approach to my work may be a quick keyword search before you proceed.

The best I can do is write my columns. Beyond the rules I’ve linked to above, I’m going to need the rest of you to work with me on deciding how to read it.

It sounds to me like Rosenberg got somewhat bombarded with negative comments by a few (or many) people who must take movies very seriously. I sympathize with Rosenberg. Let's drop our concern about "spoiler alerts" for movie reviews. I also think that the cartoon at the head of this column is pretty much on the mark, with respect to the "trigger warning" debate.

I was a politician for twenty years, and I have never lost the habit of thinking I still am. Politicians become used to saying things that some people (or many people) don't like. I have had a lot of personal experience along those lines.

Way before there was any "trigger warning" debate, I often got negative reactions from those who were upset by something I said, and/or by the way I chose to say it. Sometimes, I felt bad, when I got this kind of reaction, because I, like Rosenberg, want to be polite, and want to be considerate, and want to respect other people's feelings. I have never wanted to be offensive, or to disturb people, or to surprise people in some negative way, or to make them feel uncomfortable. However, I came to the conclusion that it was fruitless, and counterproductive, for me always to be trying to anticipate a possibly negative reaction, before I said something.

The way I ultimately resolved the issue in my own mind was to contemplate, and then internalize, the  importance of the difference between "callous" and "callus."

A "callous" disregard for other people's feelings, a "hard hearted" unconcern about the impact that one's words might have on someone else, is wrong. If anyone ever reacted to something I said by telling me how upset they were, or criticized the way I said something, I tried to be the opposite of callous, and attempted: (1) To apologize as appropriate, and (2) To learn from the interaction.

On the other hand, I came to the conclusion that it was a positive benefit for me (and others) to build up our "callus," metaphorically speaking, so that we were not so easily disturbed when we rubbed up against something that we didn't like, or that startled or disturbed us. "Toughening up" our outer layers, so we are not discomposed by hearing or seeing something that we don't like, is an important part of being able to live and act in a society of increasing diversity and difference.

My view, in other words, is this: You will NOT be warned. So, don't expect to be.

If someone says something that you find disturbing and upsetting, by all means let them know, and let them know why, so they can understand the impact that their words have had. That knowledge may change how they conduct themselves in the future. Looking at it from the other side, if you are the one who is reproached for having said something that offended someone, you should try to learn from the incident. Don't continue upsetting and disturbing people if you find that something you have said has had that effect.

EVERYONE, however, in my view, should try to "toughen up" their ability to hear and see things they don't like, and to proceed ahead notwithstanding. Developing a tough outer layer, to protect sensitive feelings, is a real benefit, and we should all try to build up that outer toughness.

Hands callused from hard experience and exposure to a sometimes rough environment are tools of accomplishment. We need that hard experience. Let's not demand that the world insulate us from what will, in the end, be the very thing that will help us to survive. 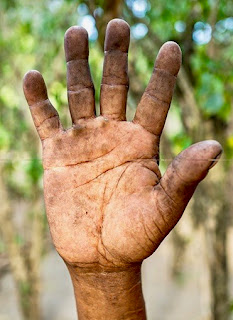