#92 / That Morcellator Metaphor (One More Time) 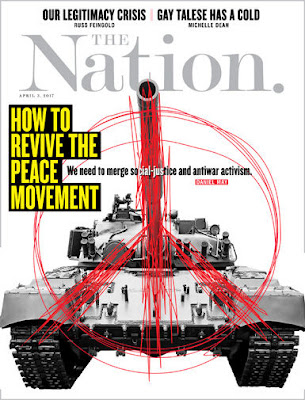 I found the cover story from the April 3, 2017 edition of The Nation well worth reading. You can click the following link to read it yourself: "How To Revive The Peace Movement In The Trump Era."

As I read the article, one of the statements made early in the discussion reminded me of my previous blog postings on the "morcellation metaphor." I discussed this topic on June 19, 2014, and then again on April 4, 2016.

There is (or was, thankfully), a surgical instrument called a "power morcellator," now removed from the market by its manufacturer, Johnson & Johnson. A power morcellator was used for the division and removal of large masses of tissues during laparoscopic surgery. A power  morcellator could turn a fibroid tumor, for instance, into a lot of little "morsels," and then suck these small pieces of tissue out of the body through a very small hole in the abdominal wall. That sure seemed like a great idea to reduce the impacts of surgery, until the problems with this idea became clear.

The "morcellation" process chopped up tissues that were sometimes cancerous, and actually spread these cancerous tissues throughout the abdomen, leading to metastasizing cancer, and ultimately to death. If you type the word "morcellator" into a search engine, the following story is likely to be at, or near, the top of your results list: "How Many People Have To Die To Show A New Surgical Technique Isn't Worth It?"

We might well ask the same question about the United States' ever-increasing devotion to military power as a solution for identified problems (like "terrorism," for instance). My contention is that the use of military power, like the use of the power morcellator, seems to be a straightforward way to accomplish a positive objective, but is, in fact, contraindicated, because the negative impacts associated with the technique outweigh any positive results achieved.

The article in The Nation, as you might suspect, shares my view on this, but it also substantiates the validity of the "morcellation metaphor."

﻿In the final years of [the Obama] presidency, US Special Operations forces were deployed in over 105 countries—more than 80 percent of all of the nations on earth. Obama authorized over 1,800 drone strikes (that we know of), which killed at least 5,500 people. American arms are shipped throughout the world, supplying the machinery for Saudi Arabia’s bombing of Yemen, the Israeli occupation of the Palestinian territories, and Egypt’s domestic repression and counterterrorism operations in the Sinai, to name just three examples. All of this eats up an annual military expenditure larger than that of the next seven nations combined.

What have these billions brought us? Today, Americans are more likely to be killed by their own police, and much more likely to be shot by a neighbor, than by a jihadist. To some, this is proof of the effectiveness of our deterrence; to others, it is evidence of astonishing overreaction. ... If the aim of the War on Terror has been to defeat terrorism, then the result has been an unmitigated disaster. In 2002, 725 people were killed in terrorist attacks worldwide; in 2014, that number was over 32,000 (emphasis added).

"Reviving" the peace movement won't be easy. It would, though, be a good idea.

The ever-increasing use of military power, just like the power morcellator, turns out to spread the disease, instead of curing it. NOT a good idea!

In fact, it is time to take that product off the market! That's what I think.