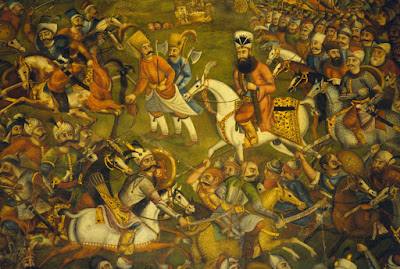 The Wall Street Journal published a column, on Monday, March 27th, the headline of which read: "'We Were Never Brothers': Iraq's Divisions May Be Irreconcilable."

The column, by Aziz Ahmad, an assistant to the chancellor of the Kurdistan Region Security Council, makes the case that efforts to find ways to bring peace to the Middle East will be unavailing, without first finding a way to provide for a physical separation between areas set aside for Shiites, Sunnis, and Kurds. This is not a new position for Ahmad; he has been saying this since at least 2016.

Whether Ahmad is correct, or not, about the need to achieve some physical separation between Muslims with different religious views, I really can't say. I confess, in fact, that I am not greatly interested, personally, in the intricacies of the religious differentiations that exist within Islam, though I do believe that this topic is a fascinating one. A reader who is interested in this topic might well review the NPR's article on "The Origins Of The Shiite-Sunni Split," an excerpt from which is included below:

The original split between Sunnis and Shiites occurred soon after the death of the Prophet Muhammad, in the year 632.

"There was a dispute in the community of Muslims in present-day Saudi Arabia over the question of succession," says Augustus Norton, author of Hezbollah: A Short History. "That is to say, who is the rightful successor to the prophet?"

Most of the Prophet Muhammad's followers wanted the community of Muslims to determine who would succeed him. A smaller group thought that someone from his family should take up his mantle. They favored Ali, who was married to Muhammad's daughter, Fatimah.

"Shia believed that leadership should stay within the family of the prophet," notes Gregory Gause, professor of Middle East politics at the University of Vermont. "And thus they were the partisans of Ali, his cousin and son-in-law. Sunnis believed that leadership should fall to the person who was deemed by the elite of the community to be best able to lead the community. And it was fundamentally that political division that began the Sunni-Shia split."

The Sunnis prevailed and chose a successor to be the first caliph.

Eventually, Ali was chosen as the fourth caliph, but not before violent conflict broke out. Two of the earliest caliphs were murdered. War erupted when Ali became caliph, and he too was killed in fighting in the year 661 near the town of Kufa, now in present-day Iraq.

The violence and war split the small community of Muslims into two branches that would never reunite.

This history of the Sunni-Shiite split, like all history, tells an interesting story, but what grabbed my attention in Ahmad's piece in The Wall Street Journal was the headline, not the text.

My attention was specifically captured by the implicit assumption, in the headline, that ONLY brothers can live together in peace. There might be a debate, based on the intricacies of the history, whether the assertion that the Sunnis and the Shiites were "never brothers," is completely accurate. True or not, though, why should that actually matter? Assuming that the two branches of Islam were "never brothers," does it automatically follow from this that the "never brothers" can never inhabit the same geographic space, in peace?

It is the assertion of the Constitution of the United States that it is possible for persons with different religious views to live together peacefully and prosperously, and I think it is important that our nation continue to provide an example of how this is done, instead of importing into our politics and civic life an assumption that members of a community must have the same religious views, if they expect to achieve social, political, and economic cooperation and a peaceful coexistence.

The "genius" of our American experiment is found in that very FIRST statement in the Bill of Rights:

Congress shall make no law respecting an establishment of religion, or prohibiting the free exercise thereof.

Recent political discussion in the United States (especially around "immigration" issues) seems to indicate that we are ceding the argument to those who would claim that "never brothers" can never live together in peace.

Let's celebrate the opposite point, which has been, in many ways, the very best thing that has come from the American political experiment. Whatever your religious views may be, and who or how you worship (if you choose to worship or to believe at all), is completely up to you. Our society will never try to impose any restrictions or penalty on an individual's right to believe and practice his or her religion. AND, we will never do anything to "establish" a religion, even if the vast majority of the citizens agree with its religious tenets.

This is a "political rule" that is aimed at achieving civil peace and prosperity, without the need for geographical separations. It works.

At a deeper level, the Constitution also recognizes a fundamental reality of our human existence.

All of us, all the time, are now, and ever were, and ever will be "brothers," in the sense that we are all together in this life. No differences or distinctions, no matter how central they may seem to us, can ever divide us at this fundamental level.

As it says in our pledge of allegiance (and without that "God" phrase, which was added so much later), we are:


One Nation, indivisible, with liberty and justice for all.