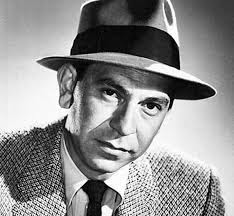 Jack Webb, pictured above, was an American actor, television producer, director, and screenwriter. He is most famous for his role as Sgt. Joe Friday in Dragnet, a television series that Webb created, and that was "perhaps the most famous and influential police procedural drama in media history."

The way I remember it (and I definitely watched Dragnet), Joe Friday was always turning up at an attractive woman's doorway, and saying, "just the facts, ma'am."

Snopes, the website that does accuracy checking on claims and assertions made on the Internet, says that my recollection is off the mark, and that the phrase, "just the facts, ma'am," is not really what Joe Friday said. He did say something similar, though, according to Snopes: He said, “All we want are the facts, ma’am” (and sometimes “All we know are the facts ma’am"), as he questioned women in the course of police investigations. I'm OK with that, though I do like my mis-remembered phrasing somewhat better.

I was reminded of Sgt. Friday's commitment to "just the facts" as I read an article in the Tuesday, April 18, 2017, edition of The New York Times. Steven Ballmer, former Microsoft CEO and the current owner of the Los Angeles Clippers basketball team, has been spending his retirement (and his  own money) on setting up a new website that, like Snopes, aims to make "truth" accessible to the ordinary person.

In Ballmer's case, the effort is not to debunk bad memories, like my memory of what Joe Friday said on Dragnet. Ballmer wants to let people know what all levels of government actually do with our money.

Ballmer's new website, USAFacts, provides access to a huge database on governmental spending at the federal, state, and local level.

As for that website itself, my preliminary review indicates that USAFacts is definitely a "go to" place for anyone who wants "just the facts" about what's going on in the United States of America.