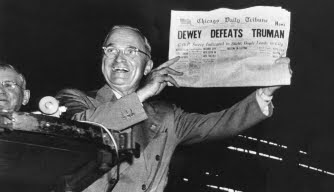 What do Harry S. Truman and Donald J. Trump have in common?

For one thing, they both won presidential elections that "everyone" thought would be won by their opponents. In addition, as noted by David Ignatius in his April 18, 2017, column in The Washington Post, both Truman and Trump entered upon the presidency "with little knowledge of the international problems they were about to face, and with worries at home and abroad that they weren’t up to the job."

That comparison made, Ignatius says that that President Trump could learn a lot from Truman. Ignatius' column, as published in the Santa Cruz Sentinel on April 19th, carried this headline: "Trump could learn from Harry Truman on trust." In the online edition, found on The Washington Post website, the column's headline reads: "Trump needs a dose of 'manly virtues.'"

I have some thoughts about this Trump-Truman comparison.

First, I do NOT look forward to the idea that Donald J. Trump should learn from Harry S. Truman that it is "OK" to drop an atom bomb on an asian nation that has defied the United States.

Second, I think the Washington Post headline sends exactly the wrong message to our current president. A guy who felt compelled to make clear to the public that his "small hands" didn't mean that other parts of his anatomy were similarly sized, might have some suppressed concerns about just how "manly" he really is. Getting into wars with Korea, and dropping atom bombs (both accomplishments of President Truman), are NOT the kind of "manly virtues" that Trump should be seeking to emulate. At least, that's my opinion!

Here is the statement in the Ignatius' column that most immediately attracted my attention:

In one of those curious rhymes of history, Trump faces a similar challenge to Truman’s in confronting North Korea. Truman went to war in 1950 to reverse a North Korean invasion of the South. Trump is now perilously close to conflict in his attempt to halt North Korea’s defiant nuclear program (emphasis added).

Ignatius seems to condone the idea that Truman could (himself) "go to war," and that Trump, following his example, could (himself) enter into a conflict with North Korea. Just to reacquaint the columnist with the Constitution, that is not the way it is "spozed to be."

Congress declares war, not the President:


War Powers. Article I, Section 8, Clause 11 of the U.S. Constitution grants Congress the power to declare war. The President, meanwhile, derives the power to direct the military after a Congressional declaration of war from Article II, Section 2, which names the President Commander-in-Chief of the armed forces.

Truman did not, in fact, obtain a Declaration of War in the case of the conflict with Korea. The Korean conflict is one of those many examples in which the United States has gone to war without following the procedures set out in the Constitution. Here is a comment from a helpful article in The Atlantic, "All  the Previous Declarations of War":

The United States Congress has not formally declared war since World War II. All of our wars in the Middle East have been authorized using other means, which rather goes to the heart of the nature of those different conflicts. U.S. entry into World War I and World War II took place through joint congressional resolutions stating "a state of war exists between the Government of Country X and the Government and People of the United States," where country X was, variously, Germany, Japan, Italy, and so on.

It would be impossible to write such a sentence about Syria today. In what meaningful way does a state of war exist between the United States and Syria? None. That's why Congress, if it approves anything, will approve an authorization for the use of force. And if history is any guide, that's going to be a rather open-ended commitment, as fuzzy on the back-end as on the front.

[Furthermore], America has done a better job of winning its declared wars in the last century than achieving clear-cut victories in ventures authorized under legislative measures that fell short of a formal declaration of war.

I agree with David Ignatius that Donald J. Trump should seek to develop the following qualities that Ignatius attributes to President Truman: "quiet leadership, fidelity to his beliefs, [and] a disdain for public braggadocio. [Truman] never took credit for things he hadn’t accomplished. He never blamed others for his mistakes."

I think calling these "manly" virtues may steer Trump wrong, but there is a definite "contrast" between Truman and Trump, and I think Ignatius is correct that Truman comes off as having the better temperament for the presidency. It would be great if Trump were to model his temperament on Truman.

But let's not get carried away. It is imperative that American citizens make clear, in every way we possibly can, that following Truman's lead into an undeclared war with North Korea, and in his use of nuclear weapons, is NOT a model for our current president.

And maybe, just maybe, we could get our members of Congress to do their job? No war without a declaration? How about that? I'd like to propose that we stop allowing "the president" to "go to war."

When "the president" goes to war, it is "we" who go to war. It is we who are put at risk. We, through our elected representatives, are the ones who are supposed to decide whether or not we want our nation to unleash the destruction of war on others and ourselves. So far, in our history, the nation has only voted to do that eleven times.

Our presidents have not felt so constrained. Let's not give any clearance to Trump to follow Truman in that extremely bad example!