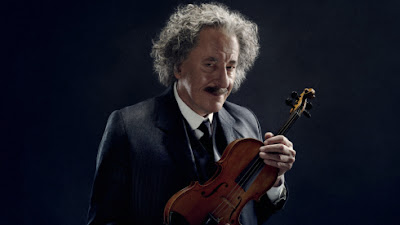 National Geographic has announced a new series, "Genius." It appears that this series will be a kind of Einstein soap opera. Anyway, that's how I read the review in Newsday, which dubs "Genius" a "brainless Einstein bio." Here's Newsday's take:

WHAT IT’S ABOUT National Geographic Channel’s first scripted series — 10 hours — is an adaptation of Walter Isaacson’s “Einstein: His Life and Universe” (2007), starring Geoffrey Rush as Albert Einstein. The first two hours toggle between the life of the younger Einstein (Johnny Flynn) and Einstein in 1922, just after the assassination of his friend Walther Rathenau, foreign minister of the Weimar Republic, murdered by right-wing proto-Nazi terrorists. Also starring Emily Watson as Einstein’s second wife (and first cousin), Elsa Löwenthal. This is a Brian Grazer and Ron Howard production.

MY SAY You know you’re in for a bumpy 10-hour ride through the space-time continuum of Einstein’s life when one of the first scenes reveals him grinding against his secretary.

Bumpier still when, as a callow lothario, he blandly dismisses the affections of a potential spouse with this line: “I’m not sure I want to spend life with someone who can’t carry on a compelling conversation on the nature of things.”

Ah, what nature of things would that be, Albert? We find out soon enough: “I’m head over heels in love with your mind,” he tells future wife Mileva Maric (Samantha Colley), while both are under the sheets.

I have always venerated Einstein because his famous equation has always symbolized, for me, the power of "theory." As a theoretical physicist, Einstein published that very consequential equation:

This equation tells us, theoretically, that a very small amount of mass contains an almost unimaginable amount of energy: 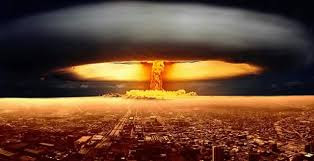 Nobody really knew that, until Einstein's "theory" said it was true. Turns out (as everyone now knows) that Einstein's "theory" was correct. Finding out how to go from "theory" to reality was not that easy (a lot of work was involved), but until there was a "theory," no one would even have tried. To me, that is the most important point, and that is why it is important to maintain a "theoretical" perspective on the world we inhabit, instead of succumbing to the mistaken belief that what currently exists is an inevitable and limited reality.

If the theory is right, however, such a transformation can be accomplished. Human action can release incredible energy, and can transform the world that "is" into something else.

Such a transformation can be for good or ill, of course (as in the case of Einstein's equation). The possibilities range from Utopia to the Holocaust, which means that the revelation that "anything is possible" may or may not be good news, depending on who finds out how to release the power of human possibility, and what they choose to do with it.

We can change the shape and character of our human world through the choices we make and the actions we take. Theoretically speaking, "anything is possible" within the human world. We live not in the world of theory, though; we live in an actual and existing world that is the result of our past choices and actions, and theory tells us that within this "political world," we can chose to act differently, and can transform, and create it anew, for good or ill.

Given that we can release incredible and transformative energy by our choices and our actions (that's what the theory tells us), it is about time for a Manhattan Project aimed at Utopia.

We don't have much time left, I think, to choose and to act, and we know, already, what happens if we don't move towards Utopia. Another Holocaust is possible, too. In fact, it is in the wings!