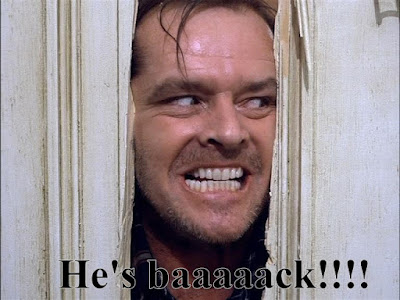 On Easter Sunday, a column by Washington Post pundit Charles Krauthammer carried the following title, as the column appeared in the print edition of the San Jose Mercury News: "Trump strike puts the world on notice that America is back." As is often the case, the online version of Krauthammer's column (which is what you'll see if you click on the above link) carries a title that is different from what you find in the print edition, though the content of the print edition is faithfully reproduced in what you will read online.

As I read my Sunday paper, I was struck by the print edition title, more than by the content of Krauthammer's column, which is a predictably approving celebration of the use of American military force. The image that came to my mind, as I read the title, was very much like the above picture.

The "He's baaaaack!!!" phrase, I think, is associated with the "I'll be baaaaack" promise that California's former governor, Arnold Schwarzenegger, makes in his famous 1984 film,  The Terminator. I am not absolutely positive about that, but when I read the title of Krauthammer's column, on Easter, putting the world on notice that "America is back," the image of a deranged Jack Nicholson is what came to my mind.

In my opinion, the "notice" that President Trump has now provided to the world, by firing missiles into Syria, and by dropping the largest non-nuclear bomb in our arsenal on Afghanistan, is NOT the message that Americans should be sending out to friends and foes around the globe. I think my personal reaction to this message is the same reaction that most people in the world will have, when they get the notice that "America is back."

_____________________________________
FOOTNOTE:
I can't help but note a great irony in using the "America is back" title on a column appearing on Easter Sunday. For Christians, of course, Easter is a celebration of the greatest "I'll be back" promise ever made. And that promise was not that death-dealing missiles and bombs could be expected if people didn't conform to the rules of good conduct.