#106 / My Vacations Are Not Subsidized 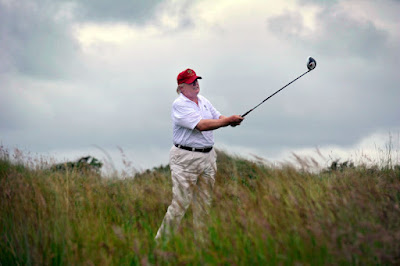 The picture above comes from an article by Stephen A. Crockett, Jr. The article is titled, "Obama Spent $97,000,000 on Vacations in 8 Years. Here’s How Much Trump Spent in 10 Weeks." Crockett  is a Senior Editor at The Root, an online source for "Black news, opinion, politics, and culture." That is where Crockett's article was published. Crockett, by the way, says that his approach to journalism can be described as follows: "When they go low, you go lower."

So, how much did President Trump spend on vacations in 10 weeks?

According to Crockett, who calls the president "an orange-skinned snake oil salesman," our President spent "$24 million vacationing in his first 10 weeks [in office] ... about as much as President Barack Obama spent in two years."

I join Crockett (and I bet a lot of other people) in being outraged that the taxpayers are spending about $2.4 million per week to make sure that our president can get out on the links as frequently as he seems to want to.

Let me add, however, that I am similarly outraged that the taxpayers spent $97,000,000 on vacation security, transportation, and other costs to make it possible for the Obama family to get away from the White House during President Obama's two terms. That eight-year total works out to only $213,173 per week for President Obama, versus that $2.4 million per week figure for President Trump. Trump beats out Obama in this spending contest by a factor of 11 to 1. That doesn't really make me feel better at all. Too much money, in either case!

If you believe Brainy Quote, it was Louis Brandeis who said "the most important political office is that of the private citizen." I happen to think that's right (no matter who said it, or when). This pattern of vacation spending, in which the citizens are treating the president and the president's family like royalty, providing them with unlimited recreational enjoyment at a large cost to the citizens, and at no cost to the president, is flatly incompatible with the idea that the "citizens" are the important ones.

Private citizens don't have their vacations subsidized. "We, the people," are supposed to be in charge of the elected officials who run the government on our behalf. It's hard to remember that when we treat those folks like kings.