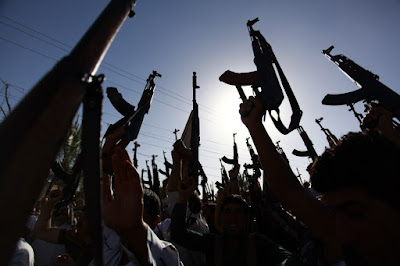 I am not opposed to all wars.

These are the words of then-Senator Barack Obama, in a speech in Chicago on October 2, 2002. The "dumb war" he was specifically talking about was the War in Iraq, begun by then-President George W. Bush.

In an opinion column in the Monday, April 10, 2017, edition of The New York Times, Samuel Moyn and Stephen Wertheim quoted the former President on the topic of "dumb wars." Moyn is a professor of law and history at Harvard University. Wertheim is a fellow in history at King's College, Cambridge University.

The column by these historians was prompted by President Trump's missile strike on an airport in Syria. Moyn and Wertheim didn't think that was very smart They expressed concern that "Mr. Trump may wind up repeating his predecessor's pattern of anti-Iraq-war campaigning and perpetual-war governing."

The professors, in other words, skeptical about our current president, are not exactly handing out plaudits to our former president. They are not very happy about the state of "perpetual war" into which the United States has plunged itself, a state of war that was perpetuated throughout Obama's two terms as president, and that continues to the present day.

For some reason, never convincingly explained (and maybe just because he had spoken out against "dumb wars"), the Nobel Prize Committee saw fit to award the Nobel Peace Prize to President Obama in October 2009. Maybe the Nobel Prize Committee shared my perspective, which is that if you are against "dumb wars," you are probably pretty much against any wars, in general. I must say, that would definitely be my own judgment.

Moyn and Wertheim don't comment on that 2009 decision by the Nobel Prize Committee, but their article certainly suggests that the way President Obama conducted himself, on the issue of war, was not very much of a model. I definitely agree.

In fact, if I had a chance to put a question to the former President, here's an inquiry I'd like to make:

Realizing (and applauding the fact) that you are against "dumb wars," can you tell me what wars (following the end of World War II, which ended before you were even born) you would NOT describe as a "dumb war?"


If our former president reads this, by some chance, and sends me an answer, I will be sure to share it on Facebook!

As for our current president, who has just ordered the "mother of all bombs" dropped in Afghanistan, please don't double down on dumb!