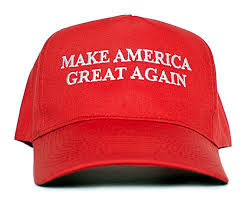 I think it is time for Democrats and progressives to admit the truth. The good guys lost the 2016 presidential election because Donald Trump had a better slogan.

Who could be against making American great again? What's the comeback? Does anyone want seriously to argue that we should NOT attempt to make America great? Even if you think that America is already pretty great (and a lot of Americans aren't feeling this is particularly true, right at the moment) who would want to be running against making America even greater?

The answer is that no one in their right mind would want to take that on. Nobody could win a campaign by arguing against making America great, or great again, or greater in the future, so the Democrats' campaign comeback was just to ignore the issue of whether America is great, or great enough, and to attack Donald Trump as an unworthy candidate.

However unworthy he might have been (and he was certainly an unworthy candidate), that left Mr. Trump with all the high ground. In a campaign, arguments based on the personal unworthiness of the opposing candidate are steeply discounted. Just how steeply can be seen from the fact that Mr. Trump won the election.

Furthermore, as this clip from the HBO series The Newsroom notes, and as everyone in the country is pretty much aware, America is not really "the greatest country in the world," by lots of measures. Donald Trump's slogan was actually speaking to what many, if not most, Americans actually believe. America might have been "great" in the past, but it's not so great at the moment. Donald Trump had a better slogan because it spoke directly to the most central concern of the voters: What can we do to make our country better, as we either remember it having been, or as we suppose it must have been, in the past?

If the Democratic Party doesn't want to ending up playing the part of that blonde high school student, to the Jeff Daniels' character in Newsroom, then the Democrats had better start campaigning to make America great again.

That's not just a good slogan. It's what we need to do.