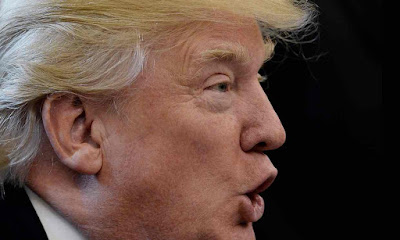 For Democrats, the temptation is to gloat.* There is a different strategy, though, that the Democratic leadership in Congress might want to consider.

What if the Democrats in Congress selected out those "progressive" statements made by candidate Trump, as he sought, during the 2016 campaign, to win the hearts and minds of ordinary Americans? The long list of Trump promises is mostly dreadful, but there are some positive promises there, too, including some relating to health care, new jobs, making America energy self-reliant, and restoring our aging infrastructure.

What if the Democrats went to the President with widely-advertised, public proposals (full-scale Twitter assault included) to achieve specific promises that the President made? These would be absolutely specific bill proposals, with near-total backing by the Democrats in Congress, dealing with issues that most ordinary Americans would like to see addressed. The Democrats, in other words, would advance a positive program for the American future, instead of just opposing all the initiatives coming from the President and the Republicans. The Democrats could promise Trump something close to a majority in both Houses of Congress, and all the President would have to do would be to pick up ten, or twenty, or some other small number of Republicans.

Energy independence and jobs? How about massive, subsidized program to result in solar installations everywhere in the United States, wherever photovoltaics are cost effective? What about regulatory relief? How about legislation that would cut through the "red tape" approach to environmental protection by the enactment of hard and fast rules on endangered species, toxic pollution, wetlands protection, and other such things, rules that would operate statutorily, not through long, involved, and costly regulatory and administrative rulemaking procedures?

You get the idea. Health care reform proposals could also be included!

I believe Democrats will come to us and say, "Look let's get together and get a great health care bill or plan that's really great for the people of our country, and I think that's gonna happen."

If the Democrats could publicly present the President with a way to achieve some of his promises, including improvements in our health care system, maybe voters would be convinced that the Democratic Party is actually trying to accomplish something positive for the country, instead of just "playing politics," which the public hates.

Such an approach would probably not work, but why not give it a try? Why not, in other words, take the President up on his offer to work with the Democrats? Let the Democrats provide the leadership for the nation, since the Republicans in Congress are clearly unable to do so. Let's illuminate that failure, but without personal attack, by just focusing on the actual ways that the federal government could help "make America great again." That's what the voters asked for, after all.

What's wrong with that picture?

Thanks to you and your energy: The Republicans’ bill to repeal the Affordable Care Act failed! And that’s not all... President Trump and Speaker Ryan both just said this failure could cost them the Republican House. Trump’s ability to pass his agenda would be completely destroyed! I need 13,873 gifts before midnight tomorrow to kick every single one of these hateful Republicans out of office  (emphasis added).

Do we ever want a functional Congress? If we do, then we need to realize that there are lots of Republicans in Congress who are there with the strong support of their local constituents. Calling them "hateful" will not endear us to the constituents. At least, that would be my guess. If we want to have a functional Congress, it's pretty unlikely that we are going to get there by this kind "Pelosi appeal."

I'm a lifelong Democrat, and I am done with this kind of politics, myself. I think lots of other Americans are, too.