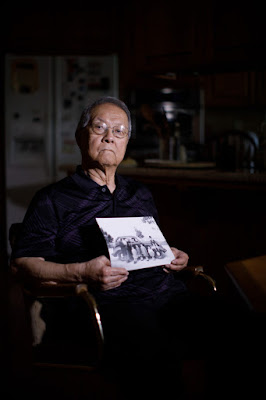 Bob Dylan's song, The Lonesome Death Of Hattie Carroll is a searing indictment of justice in the United States. Click here for a live performance. The song tells "a true story," a story that was "taken out of a newspaper," as Dylan reports in his introduction to the performance linked above.

This blog posting is also about "justice" in the United States. It is also "taken out of a newspaper." I am hoping that readers will click this link, to read a newspaper article from the San Jose Mercury News, published on March 16, 2017. That article documents what happened to about 2,000 Latin Americans of Japanese descent during World War II.

Most of us know how the United States government imprisoned about 120,000 people of Japanese ancestry during the war.

Most of us know that this action was based on an Executive Order issued by President Franklin D. Roosevelt.

Most of us know that the United States Supreme Court approved this action by the President, in a court decision (Korematsu v. U.S.) that has never been reversed, and that was, in fact, mentioned as a possible precedent for the recent Executive Orders of President Donald J. Trump, who is seeking to ban travel to the United States for anyone coming from certain designated countries where the majority of the population is Muslim.

Most Americans probably know about what our government did to persons of Japanese ancestry living in the United States after the Pearl Harbor attack. And let's be clear, when the "government" did it, "we" did it.

Most Americans almost certainly also know what we did to the cities of Hiroshima and Nagasaki to bring an end to World War II.

Most Americans probably want to forget about these things, because they are really too horrible to keep front and center in our consciousness.

But do most Americans know anything about the story that the Mercury article tells? Have we ever heard about what happened to Art Shibayama, pictured above? Do we know what the United States government did, beyond the internment of persons of Japanese ancestry living in the U.S.?

I didn't. I didn't know Art Shibayama's story until I read about it last Sunday:

The U.S, government ... coordinated with 13 other governments to round up Japanese throughout Latin America, essentially kidnapping them and detaining them in a country where they had never set foot. And to this day the U.S. government has refused to grant the former Latin American internees equal compensation for their suffering.

“This was an American war crime, but nobody ever calls it that,” said Roger Daniels, a retired history professor at the University of Cincinnati who has studied the detentions.

Now that I do know this story, I have a reaction. Apologies and reparations are required, of course. But more than that:

WE MUST NEVER ALLOW ANY KIND OF THING LIKE THIS TO HAPPEN AGAIN!

And please make no mistake. This is not some kind of "theoretical" proposition.

We know this question is going to be "on the test" that we are just getting ready to take.