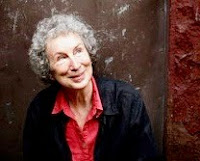 Margaret Atwood, pictured, has written a New York Times Book Review article, discussing what her book, The Handmaid's Tale, means in the age of Trump.

Discussing her thinking at the time she wrote the book, Atwood says that she had a great deal of trepidation that she would be able to "persuade readers that the United States had suffered a coup that had transformed an erstwhile liberal democracy into a literal-minded theocratic dictatorship." Accordingly, one of the rules she followed in writing The Handmaid's Tale was that she would "not put  any events into the book that had not already happened ... No imaginary gizmos, no imaginary laws, no imaginary atrocities..."

Atwood's article is very much worth reading (presuming that you have already read The Handmaid's Tale). If you haven't, you should read the book first. Despite my appreciation for the article, I do want to make one critical comment, which might be thought of as a suggestion that nothing "imaginary" should appear in her discussion about the origins of the book, any more than "imaginary" topics should have been inserted in her story.

Atwood ends the article this way:

In the wake of the recent American election, fears and anxieties proliferate. Basic civil liberties are seen as endangered, along with many of the rights for women won over the past decades, and indeed the past centuries. In this divisive climate, in which hate for many groups seems on the rise and scorn for democratic institutions is being expressed by extremists of all stripes, it is a certainty that someone, somewhere — many, I would guess — are writing down what is happening as they themselves are experiencing it. Or they will remember, and record later, if they can.

Will their messages be suppressed and hidden? Will they be found, centuries later, in an old house, behind a wall?

Let us hope it doesn’t come to that. I trust it will not.

A minor quibble. Or maybe not. I think Atwood should have dispensed with that very last, very short, sentence.

"Trusting" that we are not on the way to a totalitarian society might be disempowering. Suggesting that "trust" is the support on which we should rely might be read as a counsel that things will probably turn out alright.

That is a happy imagining.

Our need to take action to ensure that democracy is not swallowed up, not a suggestion that some kind of "trust" is warranted, is what I think might be the better lesson from The Handmaid's Tale.