Jim Wallis, writing in the April 2017 edition of Sojourners, provides his readers with the following information. I am passing this information along, just in case you haven't heard this before:

I think this qualifies as "enough said" for today's blog post. You can read Wallis' whole article, titled "Robin Hood in Reverse," by clicking that link.

You can subscribe to Sojourners by clicking right here. If you do subscribe, you'll get this poster, suitable for framing.

Just so you don't forget: 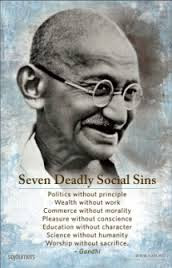