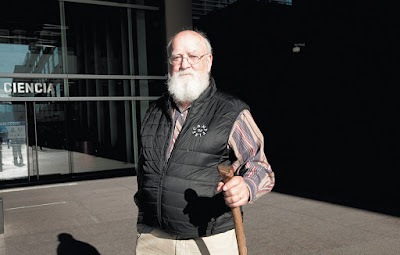 Thomas Nagel is a Professor Emeritus at NYU. He is the author of The View from Nowhere and Mind and Cosmos, among other books. That is not Nagel, by the way, who is pictured above. The picture above is of Daniel Dennett.

Dennett has a brand new book out, From Bacteria to Bach and Back: The Evolution of Minds

. Since I have already read some Dennett, and think I understand his major point, I greatly doubt that I need to read any more. I am not putting Dennett's new book on my "have to read" list, but  I did appreciate Nagel's excellent review, and I commend that to you.

Nagel makes clear in his review, right from the start, that Dennett has not changed his basic position about the nature of our human existence. Dennett has made his life's objective, as Nagel says, the "disenchantment of the human world," and here is how Nagel describes Dennett's consistent argument, through all of Dennett's very considerable writings:

Dennett holds fast to the assumption that we are just physical objects and that any appearance to the contrary must be accounted for in a way that is consistent with this truth (emphasis added).

For me (and for Nagel, as it turns out), the reality of our human existence goes beyond our undeniable material qualities. I refuse to think that I am only an "object," and demand to be recognized as a "subject," too. And saying that we are "just" physical objects? That's a disenchanting claim, indeed, and it doesn't ring true to me.

I have been quoting a favorite line from Bob Dylan recently in these blog postings (I think this is about the third time in the last several weeks, as a matter of fact). Dylan's observation certainly fits here, as I contemplate the materialist vision that Dennett always presents us, in everything he writes.

Dennett says we are "just" physical objects. Dylan says that, "Something is happening here, but [we] don't know what it is...."

As it turns out, in discussing Dennett's latest book, Nagel makes this same point in a rather more scholarly way:

The spectacular progress of the physical sciences since the seventeenth century was made possible by the exclusion of the mental from their purview. To say that there is more to reality than physics can account for is not a piece of mysticism: it is an acknowledgment that we are nowhere near a theory of everything, and that science will have to expand to accommodate facts of a kind fundamentally different from those that physics is designed to explain. It should not disturb us that this may have radical consequences, especially for Dennett’s favorite natural science, biology: the theory of evolution, which in its current form is a purely physical theory, may have to incorporate nonphysical factors to account for consciousness, if consciousness is not, as he thinks, an illusion. Materialism remains a widespread view, but science does not progress by tailoring the data to fit a prevailing theory (emphasis added).

What Nagel is telling us is that Dennett has his mind made up. Unlike a true scientist, Dennett doesn't want to consider evidence that doesn't conform to the theory he has developed. This makes whatever Dennett says suspect.

To repeat what Nagel said in the first quote I cited, after Dennett outlines his materialist explanation of our human reality, Dennett then claims, "any appearance to the contrary must be accounted for in a way that is consistent with [the] truth" as Dennett asserts it to be.

I come down on the same side as Nagel: when we say that there is "more to reality than physics can account for" that is not "a piece of mysticism: it is an acknowledgment that we are nowhere near a theory of everything." Something IS happening here, and we DON'T know what it is.

If it gets your juices flowing to think of yourself as "just" a physical object, you might want to get down to the Bookshop, or fire up Amazon, to acquire the latest dose of Dennett's distinctive brand of disenchantment. Otherwise, Nagel's review will give you all you need to know about Dennett.