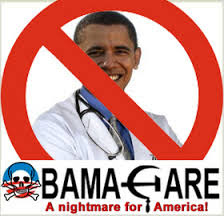 Alan Blinder has been called "one of the great economic minds of his generation." Here's the headline on Blinder's column in the March 13, 2017, edition of The Wall Street Journal:

Blinder's comments (and that headline) seem totally on target to me, but reading the headline makes me realize, not for the first time, how much the "Patient Protection and Affordable Care Act," which certainly has its flaws, has suffered from its inception by its close identification with former President Obama. The above graphic is a vivid illustration of what I'm saying.

The fact is, contrary to what the graphic implies, the Affordable Care Act is not "socialistic." It was designed, above all, to protect the private insurance industry, and was not (and is not) a radical enactment. David Leonhardt's column in last Tuesday's New York Times lays this out quite clearly. A truly responsible health care system would be "Medicare For All," which would, indeed, "socialize" our nation's commitment to health care. That "Medicare For All" approach is a true plan for national "self-insurance." It's what we really ought to be doing.

I guess, as we watch the Republicans in power destroy legislation that did make many positive gains for ordinary people, despite its flaws, that we can at least have the benefit of reminding ourselves of a political principle that is ever-enduring: trying to "take personal credit" for political accomplishments is almost always a mistake.

Governmental actions are what "we" do, together. They are collective, not individual, accomplishments.

So, whether President Obama solicited the identification of the Affordable Care Act with him personally (or whether that was done by his opponents, as a tactic - which is what Leonhardt thinks, and what I think), the deep, racist hatred that pursued President Obama during the entirety of his two terms in office is resulting in a kind of political "auto-immune" reaction that is almost certainly going to undermine the health of the body politic. That's the point that both Blinder and Leonhardt are making.

As our current President would say: