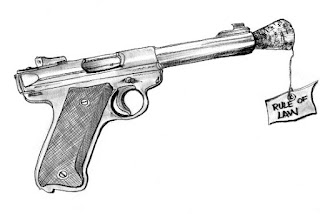 Martin Krygier is the Gordon Samuels Professor of Law and Social Theory at the Law School of the University of New South Wales, Australia. He made an appearance on the UCSC campus on Thursday, March 16th, and talked about "The Rule of Law: Why It Matters, What Threatens It, and What It Is."

As you will note, the "What It Is" question comes last for Krygier, who says that efforts to "define" all the elements of The Rule of Law really shouldn't be the main inquiry. There are lots of ways to define the constituent parts of The Rule of Law, but what we really need to understand is "Why it Matters."

So, why does it matter?

Krygier says we need The Rule of Law to constrain arbitrary power. Power itself is not a problem. A deficiency of power, actually, is usually more of a problem, both for individuals and for governments, than too much power. Whether individually or collectively, we definitely need access to power to be able to be successful in whatever we try to do. The reason that The Rule of Law is so important to us, as we consider power in its collective context, is that it is The Rule of Law that helps us make sure that the governmental power to which we are subject is not  deployed against us in an arbitrary way.

This is where Krygier pretty much said, "it remains to be seen." That is also, pretty much, the message recently delivered by Roger Berkowitz, the Academic Director of The Hannah Arendt Center at Bard College.

In an essay in the Los Angeles Review of Books, Berkowitz reviews Arendt's first major work, The Origins of Totalitarianism, and outlines the lessons that The Origins has for us in our contemporary situation, now that the "unpredictable" and "unrespectful" Donald J. Trump is wielding the powers of the presidency.

The bottom line warning from Krygier and Berkowitz? Here it is in the words of Berkowitz:


Read that Berkowitz essay! Berkowitz ends up by concluding that one of our best ways to make sure that the president's obvious fascination with power doesn't become "uncontrolled," and tip over into genuine totalitarianism, is by a strong and sustained commitment to local self-government.

Hey, I couldn't have said it any better!