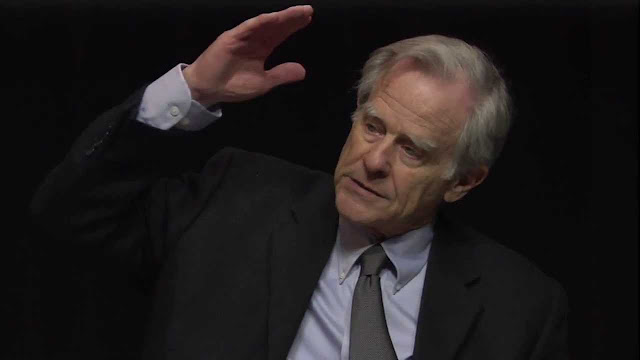 Pictured above is Dr. Theodore Lowi. I mentioned him in my posting yesterday. The picture was taken from a video discussion between Professor Lowi and a couple of students. I think the students were from Cornell, which is where Dr. Lowi taught politics.

Yesterday, I mentioned Dr. Lowi's book, The End of Liberalism, and stated that this looked like one more  good book I probably ought to read. Today, I can report that I AM, indeed, reading it, and I can now recommend this book based on some of my own reading.

The End of Liberalism was first published in 1969 (the year I officially graduated from Stanford Law School), and the book I am reading today is the 40th Anniversary Edition, published in 2009. This edition is only the second edition, and reprints the original book with a brand new preface.

So far, all I have read is the preface, but that is a pretty impressive ten pages of analysis, documenting how our democracy has evolved from 1776 to the first year of the Obama Presidency. Here is Dr. Lowi in 2009:

As this goes to press, President Obama ... has so far embraced or tolerated most of the worst features of the Garrison State, and such repetition from one party to the other creates a presumption of institutionalization. The same can be said for the corporate state of permanent receivership through his ardent embrace of discretionary spending powers and policy making by implementation....

One thing Dr. Lowi is saying in the 2009 preface is that when you look at the long sweep of American history, and particularly the history of relationships between the separate branches of government, the presidency has, gradually, usurped the powers of the legislature. Since the Legislative branch is the branch of government that is supposed to be the most "democratic," this ascendancy of the Executive branch undermines democracy. Moreover, once the Executive branch is essentially unchecked by the Legislative branch, it is much more difficult for the Judicial branch to counteract authoritarian overreach.

Obama ratified Bush's overreach, and now we have Trump.