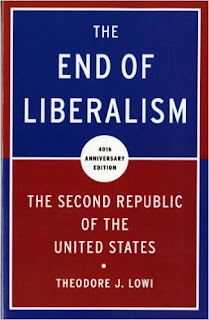 Theodore J. ("Ted") Lowi died on February 17, 2017. Wikipedia tells us that Lowi was the John L. Senior Professor of American Institutions in the Government Department at Cornell University. His area of research was American government and public policy.

Roger Berkowitz, Academic Director of the Hannah Arendt Center for Politics and the Humanities at Bard College, has written a memorial and tribute to Lowi in the Center's Amor Mundi blog. Berkowitz' reflections on Lowi are well worth reading. This statement from the Berkowitz posting has convinced me that I now have one more book to read:

Lowi’s thesis is that liberalism has led to “impotent government, no less impotent because it was getting bigger.” While Lowi does not cite Hannah Arendt, his focus on the way liberalism renders democratic government impotent reflects Arendt’s own worries that the greatest threat to freedom in America was the growing bureaucracy of government. Arendt distinguished two kinds of bureaucracy. First, the bureaucracy of a deformed civil service that leads to inefficiency and vexations that serve not the public interest, but the interest of the bureaucrats themselves.

A second, and more dangerous form of bureaucracy, is “government by decree.” It is a government that sees the law as a hindrance, an obstacle to be overcome in the bureaucratic effort to govern the people directly. Decrees are anonymous. They give the impression of constant action ... Arendt writes, “People ruled by decree never know what rules them because of the impossibility of understanding decrees in themselves and the carefully organized ignorance of specific circumstances and their practical significance in which all administrators keep their subjects.”

Reflecting Arendt, Lowi argues that liberalism has led in the United States to a government of “policy without law,” something like a government by decree.

Many of those who voted to elect Donald Trump were motivated, in significant part, at least so it seems to me, by their dissatisfaction with a government that has seemed ever more "impotent." Particularly for those in stressful economic circumstances, the government has appeared to be unable to provide any effective economic relief. Yet, despite this inability actually to solve problems, it is a government that is nonetheless constantly extending its bureaucratic reach.

I am hoping that Lowi may provide some ideas on how we could get ourselves out of this governmental cul-de-sac, because "government by decree" has just turned a dangerous corner. We are now heading, under our new president, into a "no holds barred"  despotism, which is just another way to say "government by decree."