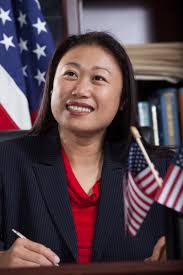 Janet Nguyen (pronounced "win") is a member of the California State Senate. She represents California's 34th Senate District, a portion of Orange County known as Little Saigon, home to the largest Vietnamese population outside Vietnam. Nguyen is pictured to the right (which is definitely where she is, politically).

Democrats did not like it when Republican Party leaders in the United States Senate refused to let Senator Elizabeth Warren speak, allegedly because Warren was being disrespectful to another Senator. In Warren's case, the alleged "disrespect" consisted in trying to read a letter from Coretta Scott King, criticizing Alabama Senator Jeff Sessions, whose nomination to serve as U.S. Attorney General was being considered by the Senate.

Senator Warren, already beloved by many Democrats, was celebrated in connection with this incident because she "persisted."

Willie Brown, former Speaker of the California State Assembly, and now a newspaper columnist (among other things), called the action to silence and remove Nguyen from the State Senate Chambers "one of the dumbest moves I've seen in a long, long time."

It certainly was, in pure political terms, as Brown explains:

The smart answer would have been to let her speak. That way they might have picked up a friend on the Republican side rather than a confirmed enemy, which is what they have now.

So, let’s review. What should have been a three-minute speech that attracted zero media attention has turned into a national story. In the process, the Democrats managed to elevate an all-but-unknown Orange County Republican into a household name in California and beyond, cementing her re-election and probably turning her into a candidate for statewide office.

Brown's observations are definitely on the mark. But let's focus, for a moment, on "principle," as opposed to doing the kind of political calculation that Brown has undertaken.

It means letting people say things you think are abhorrent and "disrespectful."

You don't like it when the President tries to prevent people from saying things he doesn't like? Well, let's not emulate that model!