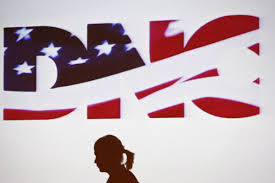 The Democratic Party is in disarray, and is in the midst of trying to regroup for the 2018 elections and beyond. I have some very mixed feelings, most of which come from my direct experience with the Party at the Democratic National Convention, held in Philadelphia in July of last year. I was at the Convention as an alternate delegate for Bernie Sanders, and I did not appreciate how the Party ran that Convention.

In January, I wrote a brief letter to The Nation, the first paragraph of which indicates my continuing skepticism about the Democratic Party and its future:

On Friday, Glenn Greenwald wrote about the election to decide who would be the next Chair of the Democratic Party (an election held yesterday in Atlanta). From what I know (admittedly not much), Greenwald's thoughts about what is happening inside the Democratic Party seem pretty accurate. Out of the internal struggle that Greenwald documents, it is absolutely vital that the Party find a way to pull together, if the Party is going to be able to act as an effective check on a federal government that is now totally in the hands of extreme right-wing forces. Assuming that some sort of Party unity can be formed, there is then a question about what strategy should be pursued.

The New York Times had a news article on Friday that suggested that the Democratic Party's "alarmed base" is seeking to prod the Party into an all out war against the Trump Administration, following the model provided by the Republican Party, in its strategy of "total obstruction" to anything and everything proposed by President Obama or the Democrats in Congress. A Saturday article in the San Francisco Chronicle, providing a California perspective, was headlined, "Feinstein pressed to resist Trump." This article reported that California Democrats are calling for Senator Dianne Feinstein to pursue the "total obstruction strategy," which she has so far not done.

Has the election of a new Democratic Party Chair, yesterday, resolved this argument and solved the Democrats' dilemma? Reading the first news accounts, I doubt it. Maybe an internal reconciliation within the Party will occur, as both the winner of the election, former Secretary of Labor Tom Perez, and the loser of the election, Representative Keith Ellison, have mutually urged. Certainly such a reconciliation is going to be needed if the Party is going to be able to act in unison to block some of the extreme measures being put forward by both the President and the Republicans that control Congress.

The "dilemma" about how best to confront the Trump presidency, however, is not only (or maybe even mainly) a dilemma for the Democratic Party. It is a dilemma for all those who want our democratic system of government to survive. We know that this is a moment in which authoritarianism is ascendant, and in which full-scale totalitarianism is waiting in the wings. We had better make good choices!

President Trump won his election in significant part because large numbers of voters believed the government is corrupt, unresponsive to the needs of ordinary people, and ineffective. The earlier quote from John Nichols, writing for The Nation, suggested that such voters associated these characteristics with the Democratic Party. To the degree that they did, the "total obstruction" strategy practiced by the Republicans helped foster that understanding. More "total obstruction" will help validate the hypothesis that our democratic government doesn't work, and thus provide additional evidence for the idea that what is needed is an ever more aggressive authoritarian approach.

Trump offers an authoritarian approach that speaks to the feeling that the actions of normal, democratic government just don't do what is needed. This belief, to the degree that it propagates within the public, is extremely dangerous to our democratic system.

And maybe Trump isn't the worst that could happen. While I would like to think that the authoritarianism of our current president is about as bad as it could ever get, we know from both historical and contemporary examples that this is not, in fact, the case. Think Hitler and the Nazis, looking at history, and think Duterte in the Philippines, in terms of a contemporary model of an authoritarianism that goes beyond what President Trump is either proposing or doing. In case  you haven't been following President Duterte, he is now openly advertising his sponsorship of presidentially-directed death squads.

My current belief is that efforts to follow a strategy that explicitly proposes "total opposition" to  anything and everything suggested by President Trump is not going to work in favor of democracy. But whether that judgment is correct or not, the dilemma remains, because the President and his supporters are classifying any opposition, and any dissent or disagreement, as a fundamental attack on the legitimacy of the people's choice in the election last year, and thus a justification for what will certainly be a set of escalating penalties against those who dare to speak or act in opposition. First, the media who don't please the president are shut off from the news. And if totalitarianism expands, as it always wants to do, those media will later be shut down and silenced.

That is the kind of possible future we are facing. How do we act to make sure that it does not come to pass? That is a dilemma, indeed. Maybe the Elizabeth Warren tee-shirt slogan gives us a hint.

We shall speak. We shall act. We shall resist. Above all else, demanding that our democratic government must be made to work, we shall persist!