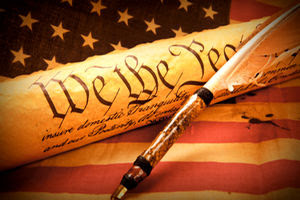 An important case is pending before the United States Supreme Court. You can read about it by clicking this link.

Six years ago, a United States Border Patrol agent killed a fifteen year old Mexican boy who was playing games with other kids in a wide concrete culvert that separates El Paso, Texas from Juarez, Mexico. The boy, Sergio Hernández Guereca, and his companions, were running up to the top of the culvert, to touch the barbed wire of the U.S. border fence. located within the boundaries of the United States.

As they were playing this game, a Border  Patrol agent grabbed one of the kids. The agent then aimed his gun at another one of the children, who had fled back down the culvert, and who was, by virtue of having done that, sixty-feet inside Mexico. That is where he was when the agent fired his gun. The agent was a good shot, and Sergio Hernández Guereca was killed by the agent's bullet, which hit him in the head.

Mexico asked the United States to extradite the agent, so he could be tried for murder in Mexico. The U.S. government refused to do that. The child's parents, then, sued the agent in the United States courts. So far, the courts have held that the agent can't be sued, because the complained about action was "completed" (by Sergio's death) in Mexico, not the United States.

On Tuesday, February 21st, the Supreme Court heard arguments on whether the Constitution gives Hernández’s parents the right to sue Mesa [the agent] in American courts for the killing their son:

If Hernández had been killed inside the United States, then the case could proceed. Or if he had been a U.S. citizen, it would not have mattered that Mesa was on one side of the border and he was on the other.

But the courts so far in Hernández’s case have said the Constitution does not reach across the border — even 60 feet — to give rights to those without a previous connection to the United States.

During the course of the arguments before the Supreme Court, Chief Justice John Roberts said that "a ruling in the parents' favor could have implications in many areas." Specifically, said Roberts, if those harmed by actions initiated in the U.S., but which result in harm in another country, can sue the responsible parties in our courts, this would include "a drone strike in Iraq where the plane is piloted from Nevada."

Hey, Mr. Chief Justice, you say that like you think that would be a bad thing!

I would argue, in fact, that it would be a good thing to make the United States government and its representatives responsible for unconstitutional governmental actions that cause harm, no matter where that harm occurs. If that were the rule, maybe our nation would be a little more careful about who it blows up with drone-dropped bombs. Maybe it would take a hard look at torturing people in places like Abu Ghraib.

In the end, of course, it is the Constitution that should guide our courts' decisions. So, let me suggest a quick refresher reading of some pertinent language from the Fifth Amendment:

No person shall be ... deprived of life, liberty, or property, without due process of law...

The Fifth Amendment does not say "no person located within the territorial boundaries of the United States..."  It says, "No person..." period.

The purpose of the Bill of Rights, which definitely includes the Fifth Amendment, is to protect the people against abuses of governmental power. Particularly because the United States government now believes it should be able to exercise its power anywhere in the world (all in the name of freedom and liberty, of course), our government should be responsible for any harm it causes when the government and its representatives act without "due process."

Shooting a fifteen year old boy in the head, with no warning, appears to have gone beyond due process. Let's extend the protections which the Consitution provides to U.S. citizens located in the United States, extending those protections to any person, worldwide, who suffers from wrongs imposed by our government.

That is what the Fifth Amendment says, in plain language. And that would make the world a better place. I'm pretty sure about that!