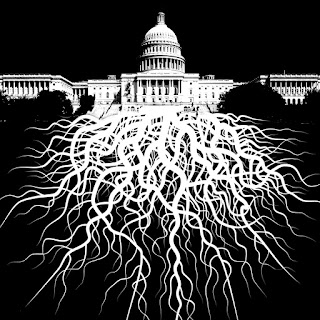 Bill Kristol is an American neoconservative, and he is not a fan of President Donald J. Trump. In fact, Kristol has recently opined, as follows, on Twitter:

Obviously strongly prefer normal democratic and constitutional politics. But if it comes to it, prefer the deep state to the Trump state.


Have you noticed that there is a lot of recent discussion about that "Deep State" thing? Here, for instance, is a link to an article from the Chicago Tribune, online. The article notes the incredible power that is now possessed by the "Deep State. It is a story "not about rogue intelligence agencies running amok outside the law, but rather about the vast domestic power they have managed to acquire within it."

Wikipedia cites to Philip Giraldi in introducing its article on the "Deep State." Giraldi is "a former counter-terrorism specialist and military intelligence officer of the United States Central Intelligence Agency (CIA) and a columnist and television commentator who is the Executive Director of the Council for the National Interest, a group that advocates for more even-handed policies by the U.S. government in the Middle East."

Despite his military and intelligence background, Giraldi is not a "Deep State" supporter. To read what Giraldi thinks about the "Deep State," I recommend an article that appeared on the website of the Ron Paul Institute For Peace And Prosperity. Incidentally, that is where I got the illustration above.

Giraldi's article is worth reading in its entirety. Here is just a sample of what he has to say:

Actual American interests in fighting a war without limits and without an end were not described [in a news article earlier referenced by Giraldi]. They never are. Indeed, in the U.S. and elsewhere many citizens often wonder how certain government policies like the Washington’s war on terror can persist in spite of widespread popular opposition or clear perceptions that they are either ineffective or even harmful. This persistence of policies regarding which there is no debate is sometimes attributed to a “deep state.”

In countries where a deep state dominates, real democracy and rule of law are inevitably the first victims. A deep state like Turkey’s is traditionally organized around a center of official and publicly accepted power, which means it often includes senior government officials, the police and intelligence services as well as the military. For the police and intelligence agencies the propensity to operate in secret is a sine qua non or the deep state as it provides cover for the maintenance of relationships that under other circumstances would be considered suspect or even illegal.

Bill Kristol, in other words, to return to his support for the "Deep State," is calling for the overt and explicit takeover of the democratic government of the United States by those military and intelligence agencies that may already, in fact, be controlling much of our national policy. The headline on a column by David Talbot, who writes for the San Franciso Chronicle, properly called this kind of an appeal "Coup Fever."

Trump is pretty bad (as far as I am concerned). However, even assuming that "the Russians" were successful in trying to influence our presidential election, to make Trump president (and we note that it's the "Deep State" types that are making that claim most directly), Trump was, actually, elected as our president, and there are constitutional ways to terminate his presidency, if necessary.

Maybe we ought to be cautious about a Kristol-like appeal to the "Deep State" to save us from what our democracy has wrought.

That is certainly the suggestion of Democracy Now which warns us as follows:

Ends and means! Remember what we know about that?

Listen to Glenn Greenwald, the journalist who worked with Edward Snowden to bring to light the official documents that show us how the United States government is spying on us all, in every way it possibly can, and all the time. That national surveillance program, implemented against ordinary citizens, is a program that is of, by, and for the "Deep State." It is a program that was vastly extended and aggressively implemented under President Obama.

I'm for using democracy to cure our ills, not any "Deep State" coup. It's not going to be easy, of course. We know that's true.

* The title on today's blog posting is meant to remind us all of "Crystal Night," which can be thought of as the beginning of the rule of terror in Nazi Germany, and as an adumbration of the holocaust to come: "In almost all large German cities and some smaller ones that night, store windows of Jewish shops were broken, Jewish houses and apartments were destroyed, and synagogues were demolished and set on fire. Many Jews were arrested, some were beaten, and some were even killed. The "Reich Crystal Night" (Reichskristallnacht) was one of the most shameful events of National Socialist Germany. Although the Jews suffered initially, the greatest harm was ultimately done to Germany and the German people."