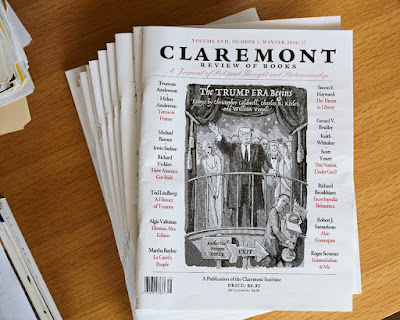 I learned about all this from an article published in the February 21, 2017 edition of The New York Times. That article, by Jennifer Schuessler, was titled, "Charge The Cockpit Or You Die." Schuessler's article in The Times discussed an article published in the September 2016 edition of The Claremont Review. The Claremont Review article was titled, "The Flight 93 Election."

"The Flight 93 Election" suggested that the November 2016 election was like United Airlines Flight 93, the September 11, 2001 flight in which the passengers "charged the cockpit," stopping the four Al-Qaeda terrorists who had hijacked the plane from carrying out their plan to crash the plane onto The White House, or onto Capitol Hill.

For the anonymous author of "The Flight 93 Election," letting the expected happen (the election of Hillary Clinton) was the disaster to be avoided. Trump's election might be a disaster, too, but at least there was still a question about that, in September 2016. With Clinton, disaster was certain:

2016 is the Flight 93 election: charge the cockpit or you die. You may die anyway. You—or the leader of your party—may make it into the cockpit and not know how to fly or land the plane. There are no guarantees.

Except one: if you don’t try, death is certain. To compound the metaphor: a Hillary Clinton presidency is Russian Roulette with a semi-auto. With Trump, at least you can spin the cylinder and take your chances.

The metaphors advanced by the author of "The Flight 93 Election" do seem "histrionic," as the article itself suggests. That is particularly true as we can now evaluate the results of the Trump victory. Histrionics can go both ways. It wouldn't surprise me to see an article discussing the Trump presidency in exactly the same terms, calling the current situation a "Flight 93 Presidency." What The Claremont Review suggested before last year's election can now apply to the Administration put in place by Donald Trump. One conclusion? We had better "charge the cockpit" or we die.

Metaphors (maybe particularly when they are "histrionic") can lead us into actions that we might come to regret. Certainly some who "charged the cockpit" to get Donald Trump elected must now be worrying about the result. If they are not, they should be. But let's not allow legitimate concerns about our democracy to be led astray by histrionics. Some of those concerned about what our new president is doing are urging that he be "eliminated" by the "deep state."

Let's wait a minute! Watch those metaphors! Our democracy is not an airplane, because we are not "passengers." Democracy cannot be "hijacked" as long as we insist that we will pilot our own government. That's what self-government is all about. We only lose it when we decide that it is already gone.