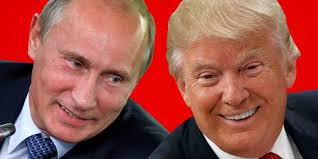 Here is a quote from a column that was published online in the February 18, 2017 edition of The New York Times. I snagged this quote from Amor Mundi, the weekly blog of the Hannah Arendt Center:

Fascists the world over have gained popularity by calling forth the idea that the world is rotten to the core. In The Origins of Totalitarianism, Hannah Arendt described how fascism invites people to “throw off the mask of hypocrisy” and adopt the worldview that there is no right and wrong, only winners and losers ... In the last decade and a half, post-Communist autocrats like Vladimir V. Putin and Viktor Orban have adopted this cynical posture. They seem convinced that the entire world is driven solely by greed and hunger for power, and only the Western democracies continue to insist, hypocritically, that their politics are based on values and principles....


This month, Mr. Trump ... was asked about his admiration for Mr. Putin, whom the host Bill O’Reilly called “a killer.” “You got a lot of killers,” responded Mr. Trump. “What, you think our country’s so innocent?” To an American ear, Mr. Trump’s statement was jarring — not because Americans believe their country to be “innocent” but because they have always relied on a sort of aspirational hypocrisy to understand the country. No American politician in living memory has advanced the idea that the entire world, including the United States, was rotten to the core.

These observations come from Masha Gessen, who writes for The Times on LGBT and Russian issues. What she says should make us think.

Historically, Americans have been willing to believe the very best of themselves, because Americans have always credited themselves with good intentions. Mistakes may have been made, but, we have always told ourselves, we are trying to do good. The idea that our good intentions are what really count can very easily be characterized as "hypocrisy," and many would say that hypocrisy is hypocrisy, whether "aspirational" or not.

Before we adopt that position, let's pause for just a moment.

When "we, the people" no longer believe that we are (or even can be) "good," we turn over governance to those who are beyond any pretense of trying to do good. We abandon our government to the authoritarians, and the despots, and the "killers."

To the degree that we believe that our entire politics is "deplorable," that it is "rotten to the core," we abandon the possibility of genuine self-government.

That is exactly how a free democracy turns to totalitarianism.

Let's not go there!