#52 / The Profound Problem With Fake Reality 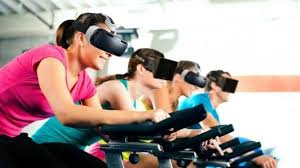 An article in The Wall Street Journal says, "Pricey VR Headsets Are Slow to Catch On." My view? That is great news!

"Virtual" reality is, actually, "fake" reality. The bicyclists pictured above, for instance, appear to themselves to be pedaling along rural roads, with lovely, natural views. In fact, they are confined in a sweaty and unappealing large room filled with others equally beguiled.

To my mind, the disconnect that "virtual reality" creates between our perceptions and the world we actually inhabit raises profound philosophical (and even theological) questions.

Human beings are, apparently, so desperate to reject their real existence in the World of Nature that they are attempting, in every way possible, using modern technologies, to live in a world that is (or rather, seems to be) created solely by humans themselves.

Efforts to deny death are understandable, but wrongly directed. Seeking to avoid the natural cycle of life, to death, to life, and particularly attempts to avoid our own participation in that cycle, is really an attempt to live in a "fake" world, a world that does not actually exist, but a world that  it seems that we can control, and over which we have dominion.

Again, this effort to be "masters of the universe," and in full, human control of our own existence, is very understandable, but it is an effort that is heading in the wrong direction.

To live in such a "virtual" world represents the triumph of death, not the triumph of life, since the basic foundation of the "real" world, the World of Nature, is that the real world turns death to life.

Our "virtual world?" It can't do that!