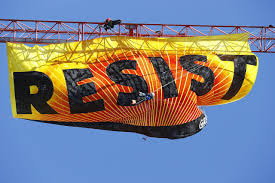 It is "Afterward," so what do we do now? In general, a one word answer appears above. The word "resist" seems to summarize the prescriptions coming from many organizations and individuals who are active in our political life.

The "RESIST" banner shown above was placed by Greenpeace activists on a crane near the White House, within one week after the Inauguration. Here's another photo, to show the banner in context: 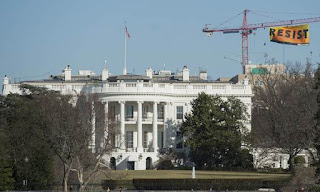 I am completely on board with the need to "resist" unconstitutional, illegal, and unfair actions by our new President and the Congress, and I was heartened by the spirited and spontaneous outpouring of direct action at airports around the country, when the President issued his probably unconstitutional, and definitely unfair and outrageous, ban on immigration from certain Muslim-majority nations. Those demonstrations are surely representative of the kind of "resistance" that is, and will continue to be, required.

I do want to say, however, that the suggestion of Angela Davis, outlined below, which resonates with me, and I think with many, requires something that goes beyond a "resistance" that can be defined as "opposition" and "response." 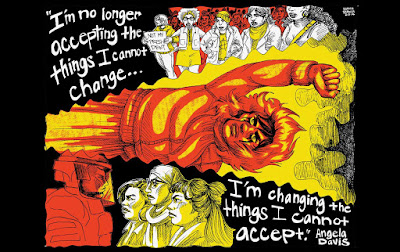 Now that it is "Afterward," and we need to decide, individually, but above all collectively, what we must do, we must not think that simple "opposition" to unfair, illegal, and unconstitutional actions, however necessary, is going to be sufficient.

"Resistance" to our current political situation must not be accomplished by simple objection to the proposals and actions of President Trump and the Republicans in Congress. As Beverly Gage says in an article titled, "Negative Energy," which appeared under that title in the print edition of The New York Times Magazine on Sunday, February 5th, opponents will have no problem finding things to "stand against." The challenge will be in "figuring out what they'll be for."

If we are serious about "changing the things we cannot accept," that means we must be affirmative, not reactive. Not only do large demonstrations not accomplish political change, as Zeynep Tufekci has warned us, "fighting back" against bad actions puts all the initiative on the side of the oppressors and opponents. If "resistance" simply means our response to the actions and proposals of others, then those against whom we are fighting will set the terms of the debate and the conflict. If that is what "resistance" means, that puts those who want to create a different reality at a distinct disadvantage.


One blogger, commenting on the "Muslim Ban" promulgated by President Trump, called it a "head fake," and said that we were "falling for it." Jake Fuentes argued that what was really going on was an effort to test the strength of the checks and balances within the government that we have always assumed can protect us against arbitrary actions by the Executive.

Fuentes argument makes sense to me. "Resistance," in the face of a President who is seeking, systematically, to increase his ability to act with arbitrary power, demands that our opposition  recreate the conditions of a genuine democracy. This will require much more than responding to the actions of Donald Trump, because what the past presidential campaign, and Trump's election victory, has revealed, is that American government is facing a fundamental challenge, and that our system of democratic self-government is in imminent peril.

George Lakey, responding to the political and governmental crisis that the President's "Muslim Ban" has revealed (even more than created) has also said something worthy of attention. Lakey is a longtime nonviolent activist, and his "10-point plan to stop Trump and make gains in justice and equality" defines how "resistance" must actually operate. It is well worth reading, and his point #3 is key:

The last time progressives in the United States faced this degree of danger was when Ronald Reagan became president. One of Reagan’s first acts was to fire the air traffic controllers when they went on strike, putting into question national air safety. Strategically, he chose “shock and awe,” and it worked – most of the U.S. movements for change went on the defensive.

Gandhi and military generals agree: No one wins anything of consequence on the defensive. I define “defensive” as trying to maintain previous gains. U.S. movements in 1980 made many gains in the previous two decades. Understandably, they tried to defend them. As Gandhi and generals would predict, the movements instead lost ground to the “Reagan Revolution” and, for the most part, have lost ground ever since.

One exception stands out: the LGBT movement. Instead of defending, for example, local gains in city human relations commissions, LGBT people escalated in the 1980s with ACT-UP leading the way. They followed up with the campaign for equal marriage and escalated again with the demand for equality in the military.

LBGT people proved that Gandhi and the generals are right: The best defense is an offense.

I hear many American progressives unconsciously talking about Trump defensively, preparing to make precisely the same mistake as an older generation did with Reagan. The LGBT’s lesson is obvious: heighten nonviolent direct action campaigns and start new ones. Instead of defending Obamacare, let’s push for an even more comprehensive health solution, like Medicare for all.