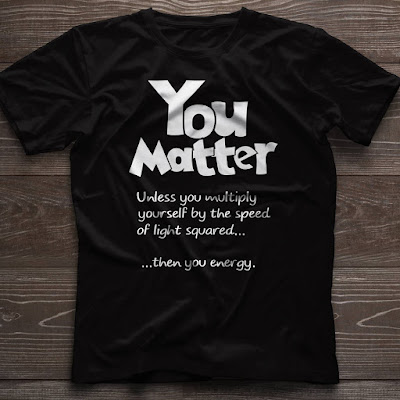 Now, there's a cool tee-shirt! And so on target, scientifically speaking! Click the link to order one (I get no royalties or percentage).

Starting back in 2010, I have written in this blog about physics on a number of occasions. In fact, as my several postings on the topic have revealed, I am kind of a sucker for physics. That is, I would REALLY like to understand physics (and I really don't).

I found The Dancing Wu Li Masters to be a compelling presentation of our modern understanding of the physical reality in which we live. I recommend it. It is a book that provides succor for those who are very uncomfortable with the purely "materialist" approach to how we understand the reality we inhabit. Zukav, using physics, not mysticism, to back his conclusion, ultimately presents our reality not as "matter-based," but as "energy-based" (and we do all know about Einstein's E = MC squared equation, so what Zukav says is credible).

In fact, even better for those with "religious" impulses (and Quakers, specifically), Zukav sees human beings as "composed of light."

I am going to be working on the implications of what Zukav says.

I'm a sucker for physics! I figure it has some important lessons to teach us, and I do think Zukav's book is a worthwhile effort to make sense of who we are, and what we're doing here.