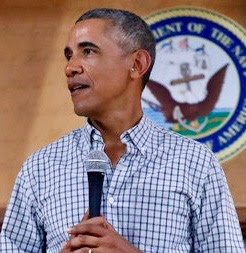 It seems that many of us are still trying to "decode" the meaning of the recent election. I know I am, and I am following what the commentators are saying, too.

The observations coming from professional pundits, and other politically savvy types (even including our current President), constitute a kind of "mixed bag" of explanations, as we all ponder what happened. How in the heck can this election have gone to Donald J. Trump?

The New York Times reported on December 27th that President Obama is "sure" that he would have defeated Donald Trump, had the President been able to run against him, and to seek a third term. Here are the President's exact words, as quoted in The Times:

"I'm confident that if I ... had run again and articulated it, I think I could have mobilized a majority of the American people to rally behind it."

The "it" the President was talking about was his "message of inclusion and helping middle-class Americans." If he had been the one delivering that message, the President said, he is pretty certain that he would have beaten Donald Trump.

Considering the President's approval rating (57%, according to a recent Gallup Survey), compared with the 38% of the voters who said, right before the election, that they had a favorable impression of Hillary Clinton, I think the President is probably right. Voting for a person you "like," as opposed to someone you don't like, could have well been a big factor in determining why so many people who didn't "like" Hillary Clinton either stayed home or voted for that other guy.

That thing about who the voters "liked," however, isn't necessarily the key to how the vote went. Another article in the December 27, 2016 edition of The Times is well worth reading. I am referring to David Paul Kuhn's opinion piece, "Sorry, Liberals. Bigotry Didn't Elect Trump."

Maybe the voters didn't "like" Clinton, but Kuhn says the voters didn't like Trump, either, and that most of Trump's voters weren't bigots. Here's a short excerpt (again, the whole article is available online, and I think it's on point):

Figures from the heights of journalism, entertainment, literature and the Clinton campaign continue to suggest that Mr. Trump won the presidency by appealing to the bigotry of his supporters ... This stereotyping of Trump voters is not only illiberal, it falsely presumes Mr. Trump won because of his worst comments about women and minorities rather than despite them.

In fact, had those people who agreed that Mr. Trump lacked “a sense of decency” voted for Mrs. Clinton, she would have been elected the next president.

Mrs. Clinton and Mr. Trump equally won over party loyalists. Yet about one in five voters did not have a favorable view of either candidate. These voters overwhelmingly backed Mr. Trump. Exit polls demonstrated that if voters who disapproved of both candidates had divided evenly between them, Mrs. Clinton would have won.

Several weeks before the election, a Quinnipiac University poll found that 51 percent of white working-class voters did not believe that Mr. Trump had a “sense of decency” and ranked Mrs. Clinton slightly higher on that quality.

But they were not voting on decency. Indeed, one-fifth of voters — more than 25 million Americans — said they “somewhat” disapproved of Mr. Trump’s treatment of women. Mr. Trump won three-quarters of these voters, despite their disapprobation.

Bluntly put, much of the white working class decided that Mr. Trump could be a jerk. Absent any other champion, they supported the jerk they thought was more on their side — that is, on the issues that most concerned them.

Any fair evaluation should give Hillary Clinton some well-deserved credit for what she did. She did what President Obama said he would also have been able to do, had he been the candidate. Clinton definitely did "mobilize a majority" in favor of her candidacy. There were over two million more votes for Hillary than for the winner.

The problem for Hillary's candidacy, as we now so clearly understand (if we didn't before), is that a popular majority does not mean a political victory in a presidential race, considering that the actual selection of the President is by the Electoral College, not by the national popular vote. Those were the rules in effect from the start, so "mobilizing a majority" wasn't quite enough. The states that ended up deciding the election were ones in which, as Kuhn says, white working class voters felt particularly disregarded and left behind by the Democrats. President Obama might have had some problems in those venues, too.

What I think is most pertinent in the Kuhn discussion is this point: Voters cast their vote for the candidate whom they think is going to do what they want to see done. To the degree that political campaigns focus on personality, rather than policy, they are apt to lose focus, and go off track.

That seems to have happened, this time around. Fewer military involvements around the world, and more attention to jobs for working families; less deference to financial elites; more income equality - those are the things that many, if not most, Americans have been trying to get their government to pay attention to.

So, the guy who said that he'd pay attention to those issues won. Not necessarily a surprise, thinking back on it!