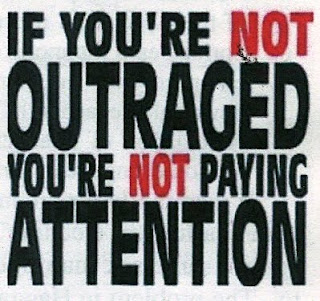 The December 19/26 edition of The Nation carried a book review by Amia Srinivasan, who lectures in Philosophy at University College, London. Her review was titled, "A Righteous Fury." To be strictly accurate, that is the title used in the print edition of the magazine. Online, the title asks, "Would Politics Be Better Off Without Anger?"

The book that Srinivasan reviewed for The Nation is titled, Anger and Forgiveness: Resentment, Generosity, Justice, by Martha C. Nussbaum. Nussbaum is Ernst Freund Distinguished Service Professor of Law and Ethics at the University of Chicago Law School. Based on what I gather from the review, Nussbaum appears to argue that politics would be better off without anger.

Srinivasan is clearly not convinced, though Srinivasan does concede that "in a non-ideal world like ours, the right to voice justified anger will inevitably be abused by those without justification, [and] this is perhaps the most plausible case for restricting the place of anger in our public discourse, and for praising the virtues of civility and calm."

Anyone who has watched a "Trump rally," and who has been disturbed by the manifest hostility, boiling within the crowd, ready to lash out, would understand the argument against letting anger prevail as a main ingredient of our politics.

So, what is Srinivasan's argument for the place of anger in our politics? I think it might be characterized by the saying found in the image at the top of this blog posting. When we consider American history, a history that includes outrageous examples of racial and economic injustice and oppression, how could anger not be legitimate? When we contemplate the destruction of the Natural World, and the mass extinctions that human actions are now causing everywhere, how could anger not be necessary? If you are not outraged and angry at the state of our political reality, you must not  be paying attention. You must not know what's going on.

Here is what Srinivasan says:

﻿Politics ... is about conflict as much as consensus. Anger can be a motivating force for organization and resistance; the fear of collective wrath, in both democratic and authoritarian societies, can also motivate those in power to change their ways. The question of whether, on the whole, anger has been politically productive or counterproductive in the long struggle against oppression is an empirical question, and one that cannot be settled from the philosopher’s armchair. Certainly it cannot be settled by a handful of historical cases that are all too easily treated as liberal fairy tales about the power of civility.

Nussbaum is also unimpressed by the thought that anger can be psychically important for the victims of injustice. Strikingly, she doesn’t discuss the many feminist and black thinkers who have argued for the emancipatory features of anger, most notably Audre Lorde, who described women’s anger as “a liberating and strengthening act of clarification.” Nor does she mention Frederick Douglass, who wrote of the moment when he finally resisted the violent attack of a slave breaker that it “rekindled the few expiring embers of freedom, and revived within me a sense of my own manhood. It recalled the departed self-confidence, and inspired me again with a determination to be free.”

It is not quite that Nussbaum overlooks the possibilities suggested by these thinkers; she concedes that getting angry can sometimes help restore a victim’s sense of self-worth, and can sometimes signal to the victim and others that an injustice has occurred. But she doesn’t register the full weight and shape of anger’s psychic importance. It is not merely that anger can make one feel better or prompt one to see the badness in one’s situation. Rather, anger is sometimes and for some people the only way of recovering a lost sense of agency. And sometimes, and for some people, it can be the only way of registering the full injustice of the world.

For me, Srinivasan's argument hits closest to the mark when she discusses the idea that anger is related to one's sense of "agency." My experience has been that feelings of anger are directly related to a sense that one is powerless against unfairness, and injustice, and other things that are wrong. Srinivasan is dead on right about that.

And that is exactly why eliminating "anger," in politics, is just as dangerous as celebrating and brandishing it. We cannot have a healthy politics unless those engaged in politics, and affected by it, feel a sense of their own power, of their "agency," to use that modern term. Politics, by its very nature, is nothing other than our collective effort to make the world be the way we think it ought to be. And conflict is built in, because we have different ideas of what would be best, and politics is our mechanism to decide upon, and then carry out, a collective course of action. To be "political," in this sense, you must feel "powerful." You must have the idea that you can change the world. A resolute confidence in one's personal power is the first requirement for one's successful participation in politics.

And if you don't feel powerful, then (it is my experience) you feel angry!

Centering our politics on anger, as a way to validate the genuine, and legitimate sense of outrage that can motivate change, is potentially dangerous and debilitating. Anger spins quickly into violence. Violence begets more violence, anger more anger. Angry and violent confrontations can quickly destroy everything, as they spread, like wildfire, ready to combust, burning down everything before them. The degeneration of anger into violence, and its consequences, should be convincing that putting anger at the base of our politics is misguided.

But we cannot suppress "anger" at the expense of justice, without destroying our politics in another way. There are many outrageous insults to both the human and the Natural World that cry out for a solution, and if we refuse to confront those outrages, because of a fear that to do so might let loose an uncontainable anger, then we abandon any chance for our politics to confront and overcome the real challenges we face in this world.

So, what should we do?

I found that an article by Bill McKibben, from that same edition of The Nation, provides us with a solution. McKibben's article is titled, "How the Active Many Can Overcome the Ruthless Few: Nonviolent direct action was the 20th century’s greatest invention—and it is the key to saving the earth in the 21st century."

In short, McKibben cites both Gandhi and Martin Luther King, Jr. as examples of how anger may be directed, with both resolution and dedication, to create a powerful, transforming political force.

I haven't read Nussbaum's book. I have read McKibben's article. I commend it to you. Click the link. The picture below tells the story: 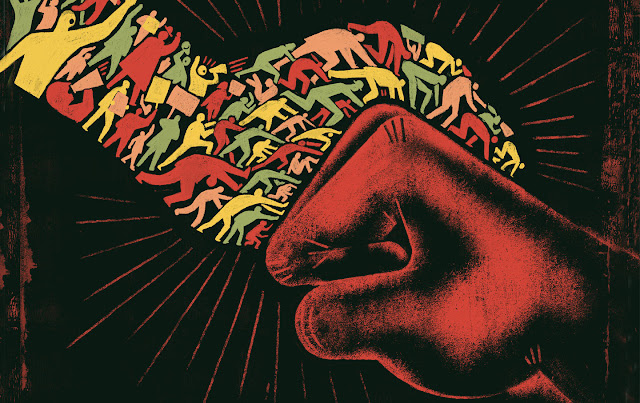