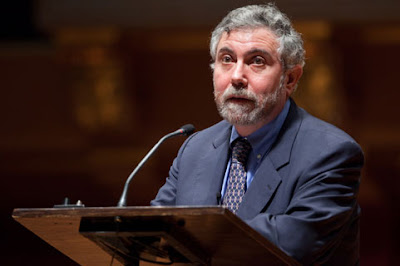 Paul Krugman's column in the December 26, 2016 edition of The New York Times was titled, "And The Trade War Came." Krugman is a pontificator par excellence, and I usually find his predictive pronouncements just a little bit pompous, because they always seem to be just a little bit too self-assured and a little bit too self-congratulatory. I particularly felt that way during the presidential campaign, last year, which did not, actually, turn out quite the way that Krugman thought it would.

At any rate, Krugman's self-important style aside, the issues about which Krugman writes are usually important ones. In the December 26th column, Krugman said this:

Relevant legislation gives the occupant of the White House remarkable leeway should he choose to go protectionist. He can restrict imports if such imports “threaten to impair the national security”; he can impose tariffs “to deal with large and serious United States balance-of-payments deficits”; he can modify tariff rates when foreign governments engage in “unjustifiable” policies. Who determines whether such conditions apply? The executive himself.

Now, in case anyone needs a refresher course in the Constitution, here is what that document says about the powers of the President (Article II, Section 1):

The executive Power shall be vested in a President of the United States of America.

The Constitution does go on to give some specifics (about treaties, making appointments, being commander in chief, and things like that), but there is not much detail in outlining what the "executive Power" given to the President is supposed to include. A hint can be found in Article II, Section 3, however, which reads as follows:

He shall from time to time give to the Congress Information of the State of the Union, and recommend to their Consideration such Measures as he shall judge necessary and expedient; he may, on extraordinary Occasions, convene both Houses, or either of them, and in Case of Disagreement between them, with Respect to the Time of Adjournment, he may adjourn them to such Time as he shall think proper; he shall receive Ambassadors and other public Ministers; he shall take Care that the Laws be faithfully executed, and shall Commission all the Officers of the United States.

The basic idea in the Constitution, which we all learned about in high school, is that the Congress makes the laws, and the President "executes" them, i.e., carries them out.

In the case of the President's duty with respect to trade, Krugman points out that the Congress has decided to let the President do pretty much whatever he wants. I believe that Krugman is quoting the law correctly, and based on the text of the law, given that the basic charge in the Constitution is that the President is to "take care that the laws be faithfully executed," President Trump can do all the (bad) things that Krugman is predicting.

What if the law had read something like this?:

The President can restrict imports if such imports threaten to impair the national security; he can impose tariffs to deal with large and serious United States balance-of-payments deficits; and he can modify tariff rates when foreign governments engage in unjustifiable policies, when and if, in each case, he is specifically authorized by the Congress to do so.

That kind of approach, leaving the key judgments about national policy in the hands of members of Congress, would prevent the kind of "imperial" Presidency that may be a temptation for our new president-elect.

Congress has, in fact, and not only in the arena of trade, delegated basic policy-making authority to the President, and this kind of policy-making delegation to the President now includes what amounts to a Congressional delegation of the "War Power," which the Constitution specifically reserves to Congress. Congress has determined to let the President decide when to engage in military actions, and Congress doesn't even have to be informed, must less authorize such military interventions.

These delegations from Congress to the President represent a complete betrayal of what the Constitution envisioned, and if we are to recapture our government, in the name of democracy, we need to insist, going forward, that our elected representatives in Congress must make the laws that determine what our nation does. The President's job is not to set policy. It is to execute the policy decisions made by the Congress!

If there is dissatisfaction with our government (and I think that's pretty much a given), let's consider whether or not that dissatisfaction might largely come from the fact that we no longer have the kind of "representative" democracy we heard about in high school.

That's just a thought! No predictions about whether it's possible to change things back.

Getting back to a democratic and representative government, if we really want to take on that task, is going to require quite a lot of political work!