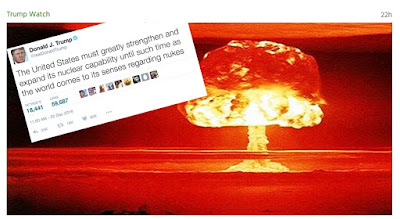 Recently (this happened after November 8th), EcoWatch set up a special page on its website called "TrumpWatch." On December 24th, when Christmas cheer might well have been in order, I got a bulletin that informed me, "Trump's Call for a New Nuclear Arms Race: 'Absolutely Frightening'." The picture accompanying the article was pretty frightening itself. I have put a copy at the top of this blog posting.

The EcoWatch headline is an example of many similar headlines I have been reading since the Trump election. I would like to suggest that we not rush to fear as our first reaction to the stupid statements (and dangerous ideas) coming out of the mouth of our President-Elect.

Fear gets the political adrenaline flowing; I definitely admit that. I suggest, though, that it's way too early to stimulate ourselves with fear. In fact, "fear fatigue" is at least as much of a political danger, I think, as any of the President-Elect's stupid statements and bad (and dangerous) ideas.

I suggest we meet stupid statements and dangerous ideas in the spirit of a calm certainty that we, as citizens, will simply not abide any such outrageous proposals. After all, we only have to be "afraid" if all these bad ideas have been made into realities, because genuine danger comes not with Twitter postings, but with real action in the real world.

We have a lot of ability to stop stupid actions. That will take substantial political work, of course, but let's focus on that. I really do think that calm determination, not a "Chicken Little" fear dance around the barnyard, is going to help us as we resist.

As I have earlier opined, we should not "expect" that our political institutions are going to cave in and fail.

Let's just be certain that they don't.