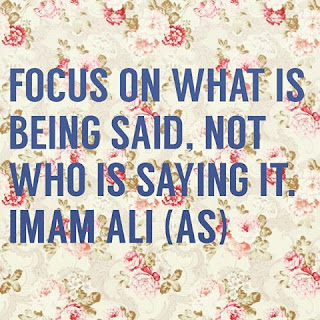 "Ali was the only person born in the sacred sanctuary of the Kaaba in Mecca, the holiest place in Islam." This is according to Wikipedia.

The Wikipedia article also says, "Ali was the first young male who accepted Islam." Sunnis consider Ali the fourth and final of the Rashidun (rightly guided) caliphs. Shias regard Ali as the first Imam after Muhammad.

Looking for an illustration for today's posting, I came upon Ali, and the quotation above. The headline for the posting is my own construction, and was all typed in before I found out what Ali had to say about this subject. I am happy to see that my thinking has an ancient lineage.

In fact, I have been thinking for some time that a healthy politics is being undermined by an apparent unwillingness, on all sides, to consider the substance of what someone might say, by way of a political comment or argument, without first deciding if the person who makes the comment is someone whose politics you "like."

We are all too anxious, in other words, to evaluate statements not on their own merits, but in the light of who is making the statement. I'm with Ali. That's the wrong way to do it.

In the Autumn 2016 edition of the Panetta Institute Update, Leon Panetta wrote an article entitled, "The Need Now: Restore Trust In Our Democracy." This observation from Panetta's article rang true to me:

This year's bitterly divisive presidential election shook the faith of many Americans in the democratic process itself...But this decline in public trust didn't start in 2016. We're seeing the results of decades of hyper-partisanship in Washington....

In these blog postings, and otherwise, I often find that when I refer to a statement made by somebody, a reader will make a comment along these lines: "Well, X-person (whose statement I have mentioned approvingly) did such and such, or is a member of such and such a group, or said this other thing on some other occasion."

The idea conveyed by such criticism is clear. Whatever might be the merits of the statement I'm quoting, the person whom I have quoted is unworthy or unreliable because of past or present affiliations or actions.

In that situation, I'm with the Imam.

We cannot ever have a healthy politics, and the kind of robust debate we need, if we refuse even to consider (much less to applaud) remarks, or observations, or suggestions made by someone who comes from "the other side."

The division between the Shiites and the Sunnis have driven Islamic nations into incredibly destructive civil wars.

Let's not let political (or religious) divisions do that in the United States.

We need to pay attention to what is said, not who is saying it!