#16 / The Thiel Spiel On Freedom And Democracy 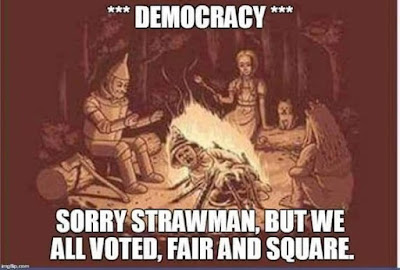 Peter Thiel is a Silicon Valley billionaire. He is now advising our billionaire president-elect, Donald J. Trump, and Thiel is apparently arguing for "authoritarian government." Furthermore, rumors have it that Thiel would like to import the Trump brand of politics and government into California. Business Insider says Thiel may be planning to run for Governor in 2018.

The following is what Thiel has to say about freedom and democracy. Let's consider what this all might mean for our state, before we get too enthusiastic about a "Thiel for Governor" campaign. I am quoting, below, from a comment by Thiel published in Cato Unbound, the journal of the right-wing Cato Institute:

I remain committed to the faith of my teenage years: to authentic human freedom as a precondition for the highest good. I stand against confiscatory taxes, totalitarian collectives, and the ideology of the inevitability of the death of every individual ... But I must confess that over the last two decades, I have changed radically on the question of how to achieve these goals. Most importantly, I no longer believe that freedom and democracy are compatible (emphasis added).

Thiel's statement has been much repeated, and to great applause from those who see life as a contest between "freedom" and the tyranny of the majority. The illustration at the top of this posting, for instance, appears in an online comment by Derek Balling, who was seeking to answer this question: "What did Peter Thiel mean when he said, 'I no longer believe that freedom and democracy are compatible?'"

Democracy is the tool of a majority to enforce their will upon a minority. It gives an illusion of "say in the decision," but ultimately those who control the votes control the outcome.

Freedom is about a lack of encroachment of others into one's own affairs. This means that - for example - freedom is about a majority not being able to tell you "you can't marry this person," or "you can't smoke this plant," or "you can't own this gun." It also limits your ability to encroach on others, which is why you have no freedom to, say, walk up to someone and punch them in the side of the head.

So I can't pretend to know what Peter Thiel was thinking about with that quote, but that's the sense that it evokes in me. I can't, in fact, understand how anyone ever consider them compatible.

To me, it is pretty clear that the resolution of this debate hinges on how we see ourselves. If we are each to understand ourselves as radically separate and individual, then "democracy" really does impose on our individual ability to do whatever we want.

If however, we see ourselves as connected, and believe that we are, in the end, "together in this," if we have a self-conception that recognizes our  mutual interdependence, and if we believe that our interdependence is at least as important as our "individuality," then it should be obvious that we need to have some mechanism for making collective decisions about what we are going to do.

An "authoritarian government" is certainly one way to solve the problem of collective governance. One person is the "decider," and he or she tells everyone else what to do. Maybe we will soon be calling this the "Trump/Thiel" model. It used to be called "Monarchy."

"Democracy" takes the opposite approach (the United States did have an entire revolution about this), and it requires us to get along and to make decisions in common that (generally speaking) are agreed to by the majority. I would hasten to note that in the American version of democracy there are some constitutional guarantees that prevent the majority from burning up the "Straw Man." The illustration at the top of the posting, in other words, is truly a "straw man" argument!

I try not to miss a chance to insert a Bob Dylan reference into these blog postings, if I think there is a plausible excuse. On the question whether we should see ourselves as radically individual, or as part of a whole, I'm with Bob. As he says in one of his album titles, we are "Together Through Life."

If that's our basic reality, and we really are "together in this," then I think Winston Churchill beats Peter Thiel, hands down: