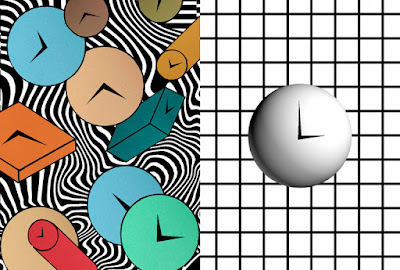 On November 6, 2016, the day that we all "fell back" one hour, implementing Daylight Savings Time for the upcoming winter, The New York Times ran a provocative article by James Gleick, "Time to Dump Time Zones."

The article is pretty short, and well worth reading. The basic idea is that the whole idea of "time zones" should be eliminated, and everyone on Earth should move to a system of uniform "Earth Time."

Currently, the world structures its time-keeping system so that 6:00 a.m. is when morning begins (more or less) wherever in the world you are. 12:00 a.m. means it's midnight. 12:00 p.m. means it's noon. Of course, when it's noon in Santa Cruz, California (with the sun directly overhead on the summer equinox) it will be a different time, elsewhere; for instance, it will be 9:00 p.m. in Paris.

Gleick suggests that the entire planet should have one "time zone." Thus, when it is 12:00 noon in Santa Cruz, it will also be 12:00 noon in Paris. Of course, under the current system, 12:00 noon always means that it's midday, no matter where on earth you are. Under the Gleick system, which he calls, "Coordinated Universal Time, or U.T.C.," 12:00 p.m. (I think we'd have to drop the "noon" and "midnight" modifiers) could well be in the middle of the night.

Intellectually, the proposed U.T.C. system is interesting, but I do think it's worth pointing out that it would be a step away from trying to tie our time-keeping system to our actual experience of physical reality. Our planet, part of the World of Nature, revolves around the sun, and that means that we all get roughly twelve hours of sunlight and twelve hours of darkness, each day, no matter where on Earth we live. Is our relationship to this natural system more or less important than our own human-made system for describing the reality?

Our current system acknowledges that the physical experience of what we now call "noon," or 12:00 p.m., is the key thing that we need to know about time. If it's "noon" in Hong Kong or Paris, we can picture what the people who live there are experiencing. But if the "time" we decide to use is a uniform human-created convention, we won't intuitively, know what someone in Hong Kong or Paris is doing at 12:00 p.m. We will have to consult a chart.

I think I'd like to stick with the current system. 12:00 p.m. should always be "noon," the same for everyone, all around the world. Wherever you are, noon (12:00 p.m.) should mean that the sun is high in the sky, and that you have reached the mid-point of the day. This system (the current system) lets us all empathize with the other inhabitants of the planet. We know what they are experiencing, pretty much, when it's 12:00 p.m. where they live.

Gleick's proposal? It doesn't have that feature. It's not for me!