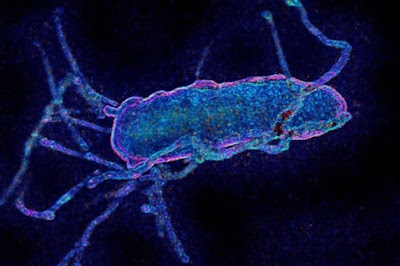 The beautiful creature pictured above is an Escherichia coli bacterium. Usually called "E. coli," the bacteria of this species are commonly found in the lower intestines of warm-blooded organisms. Sound like anyone you know?

Yep! We've got 'em, and in abundance. If you click right here, or click the link above, you can get a briefing from Wikipedia.

The picture came from an article published online by Scientific American. The author of the article is Erika Check Hayden, who is a science and technology reporter based in San Francisco. She also teaches at the University of California, Santa Cruz. The article originally appeared, I gather, in Nature, the international weekly journal of science.

While I love the picture, and think the article is well worth reading, I am not really very positive about the news that Ms. Hayden brings us:

Synthetic biologists report the most far-reaching rewiring yet of a bacterial genome. The feat, described ... in Science, involved repurposing 3.8% of the base pairs of the bacterium Escherichia coli.

The scientists replaced 7 of its 64 genetic codons—sequences that code for amino acids—with others that produce the same components. They were able to reduce the number of codons by synthesizing the DNA in 55 fragments, each of which was 50,000 base pairs long. They have yet to reassemble those pieces into a functioning E. coli.

Despite that, the team, led by researchers at Harvard Medical School in Boston, Massachusetts, say that it is a major step in the push to engineer organisms with new properties, such as resistance to infection by viruses. The synthetic biologists, including George Church at Harvard, reported their results on 18 August in Science. They say the work also serves as a prototype for the Human Genome Project—Write, in which scientists aim to synthesize a human genome.

“This is a demonstration that that kind of radical reengineering is feasible,” Church says.

Finding ways for human beings radically to "reengineer" the human genome, as part of a project that aims, implicitly, at liberating human beings from the constraints of their origins in the Natural World, seems very ill-advised to me.