Pictured above are young Somalis, near the wreckage of a car bomb after a double suicide attack. The attack was carried out by the al-Qaida–affiliated extremist group al-Shabaab; it killed eighteen people and injured dozens more at a popular Mogadishu restaurant in the Somali capital on September 7, 2013. The picture was chosen to illustrate an article titled, "Deadly Force," which appeared in the Summer 2016 edition of The University of Chicago Magazine.

A friend sent me the article (including the picture) as a follow up to a blog posting here called, "Do Unto Others." My point in that posting was that the United States government should stop carrying out drone attacks on those it regards as terrorists, unless and until we are all prepared to have an increasing number of terrorist attacks, including drone attacks, directed at us.

The "Deadly Force" article notes the increasing rise of suicide terrorist attacks, which it calls the "lung cancer of terrorism." It cites the work of Robert Pape, professor in political science and director of the Chicago Project on Security and Terrorism, as follows:

The belief that only Muslim groups engage in suicide terrorism “is becoming a self-fulfilling prophecy" ... "The more we’re putting different Muslim populations under heavy military intervention stress, the more we’re seeing suicide terrorism." Pape believes the American invasions of Iraq and Afghanistan triggered the deadly wave of suicide attacks in the Middle East and the West that continues today.

To deter potential terrorists, Pape argues the United States should limit military intervention and instead focus on improving domestic security. He also hopes the United States will support stable governance structures that benefit the local people in the Middle East, not just American interests. This, he thinks, will prevent the rise of new terrorist groups and recurrence of old ones. “The study of suicide terrorism … tells us that the political solutions are the true lasting solutions.” 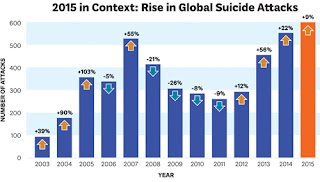