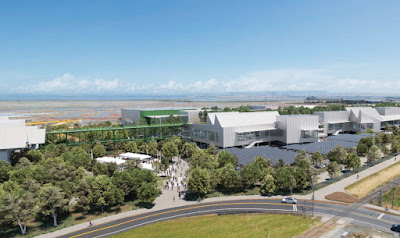 The San Jose Mercury News ran a story in its Sunday, November 6, 2016 edition that was titled, "Facebook expansion approved." Here is a brief excerpt from the article:

Menlo Park has approved Facebook expansion plans that will add 6,550 employees, roughly 1 million square feet of office space and a 200-room hotel along the Bayfront Expressway.

While some residents and city officials expressed concern about the toll on housing and traffic such a large expansion could take, the City Council on Tuesday unanimously approved the 301-309 Constitution Drive project. It also approved an agreement that calls for Facebook to either build 20 below-market-rate units or pay $6.5 million in fees into a city fund dedicated for such housing.

So, 6,550 new employees and 20 new housing units that an average or below-average income person could afford.

This is happening everywhere, including in my own home town of Santa Cruz, where ordinary income people are being driven out of their housing because they are outcompeted by persons with Facebook-level salaries.

In fact, this decision in Menlo Park will make housing prices worse in Santa Cruz, because some of those new 6,500 Facebook employees will locate here. The Facebook fiasco in Menlo Park will increase the likelihood that the so-called "Corridor Plan," in Santa Cruz, which proposes to put high-rise housing along every major transportation corridor in the City, will in fact go through.

When elected officials try to increase city revenues, without paying any attention to what that means for their existing residents, the result is a disaster for the community.

Based on the election results in Santa Cruz, on Tuesday, voters in my city haven't gotten the message.