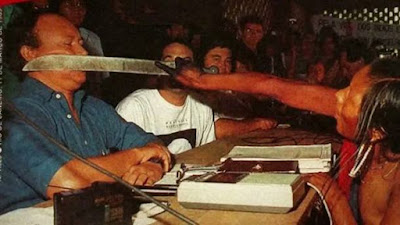 Being too "polite," or too deferential to officials, she said, is "where I see the public failing at their task."

To emphasize what she thought might be the right approach, my Facebook Friend posted the picture above, and said: "Here's how civilized people behave when their land and water are threatened."

I basically agree with you about the inappropriate willingness of members of the public to say nothing to confront elected or appointed officials (who work for them, after all) when the officials are purposefully attempting to quell the expression of real dissent. But "organized" opposition is what is needed, so everyone in the group feels supported to speak out. Isolated individuals always feel weak vis a vis those in positions of power, and a strong group is needed to counteract that natural human tendency to be "polite," even when rights and the truth are being trod upon.

My formula for effective political action is a small group (5-15 people) who meet weekly. Without that, it's hard for individuals to stand up to institutional power. You may be, as an individual, somewhat of an exception! But still, my advice is to leave your machete at home!!