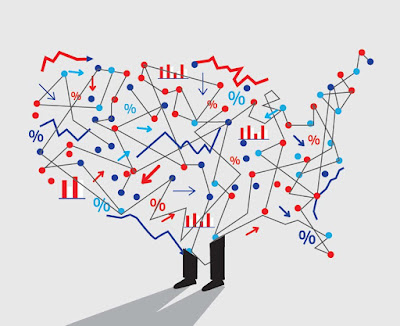 The November 7, 2016 edition of The Nation carried a review of three recent books on American politics, The Fractured Republic by Yuval Levin, American Amnesia, by Jacob Hacker and Paul Pierson, and Democracy For Realists, by Christopher Achen. The review, by Timothy Shenk, was titled, "Democracy's Revenge."

I suggest that you might want to read the review, if you think you might like to read one of the books. Shenk does provide a brief synopsis of each one, but then goes on to make some personal comments, including a couple of interesting, but somewhat contradictory, observations.

First, there is this observation, noting a growing lack of interest in maintaining "democracy" as an essential requirement of effective government:

Evidence is accumulating that support for democratic institutions has begun to fade across the world. ... Polls from an array of countries reveal mounting support for more authoritarian approaches to governing. In the United States, this trend is most pronounced among millennials, with only around 30 percent willing to describe living in a democracy as “essential.”

This disillusionment with democracy has been a long time coming. In 1840, five years after Tocqueville’s Democracy in America called for “a new science of politics” to understand the new world that democracy was creating, more than 80 percent of the country’s eligible voting-age population took part in that year’s presidential election. Only once during the remainder of the 19th century did the total dip below 70 percent. In no presidential election over the last 100 years has the turnout exceeded the lowest rate from this earlier period. The number of potential voters has expanded, and talk of politics saturates our culture, but judged by the simplest of standards—who casts a ballot—American democracy is deep in a century-long slump.

Tocqueville’s successors—policy and data journalists, Beltway wonks, and political scientists among them—can draw on more sophisticated tools for analyzing contemporary democracy than anything the French aristocrat could have imagined. But some truths can’t be found in a spreadsheet. “Effective democracy,” Achen and Bartels write, “requires an appropriate balance between popular preferences and elite expertise.” Fair enough—except that for decades this balance has tipped more and more in the elites’ favor and against popular control. With public power increasingly concentrated in agencies outside immediate democratic oversight, and with national governments professing themselves unable to defy global markets, the value of a vote has decreased (emphasis added).


Second, despite what he has just said in the foregoing paragraphs, Shenk also says this, and I think accurately:

[It]﻿ is ... striking is how quickly this fatalism about democracy can give way to hope. Barack Obama’s 2008 campaign, following the despair that liberals felt in the Bush years, supplied a vivid illustration of this dynamic. At first, it appeared that Obama had touched off a passing democratic mania that would subside once the realities of governing set in. Then the same excitement surfaced again in 2011 with Occupy Wall Street, and again around Black Lives Matter, and then again with Bernie Sanders. For almost a decade, American politics has coursed with a new sense of possibility—and not just on the left. From Sarah Palin to the Tea Party to Donald Trump, Republicans have been singed by their own encounters with rekindled democratic spirits.

The interweaving of these trends—diminished confidence in democracy today, coupled with rising optimism about what democracy might become—gives contemporary politics its bipolar quality. A rising generation of voters is both more skeptical of democracy than its forebears and more willing to support a democratic socialist for president. Activists often feel as if they’re flinging their bodies against locked iron doors, but there are times when it seems like these doors might swing open. The question now is what we’ll find on the other side (emphasis added).

For me, the key word is "possibility." What is "possible" may or may not be realized. I don't think we're through the locked doors yet.
But maybe, after this coming election, those wanting to restore American government to its former commitment to a genuine democracy will be able to break down the barriers. Shenk's speculations on the subject seem to indicate that the democrats from the Bernie camp, Black Lives Matter, Occupy Wall Street, and the Native Tribes defying and denouncing the oil conglomerates, should be trying to see what allies they might find on the Tea Party side.